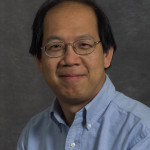 Esmond Ng has more than 35 years of experience in research and development in high-performance numerical algorithms and scientific computing, including 30 years of working with and at the Department of Energy national laboratories.

Ng is one of the leading experts in sparse matrix computation and is well known for his work on the theoretical aspect of sparse matrix computation and the development of efficient sparse matrix algorithms. He was a key contributor to the well-known SPARSPAK package, which was one of the first efficient and reliable software packages for solving large sparse systems of linear equations. The package was used widely in industry (such as Boeing and NASA) and universities.

His research includes combinatorial aspect of sparse matrix computation, design and implementation of reliable and efficient sparse matrix algorithms for advanced computer architectures, and complexity analysis. He is heavily involved in computational science and engineering and has been engaging in the development and application of sparse matrix techniques for solving large-scale scientific problems, particularly.

The sparse matrix algorithms that Ng and his collaborators have developed are well known and have been used in a large variety of scientific and engineering applications, such as structural analysis, numerical optimization, computational fluid dynamics, and finite element calculations.

Ng has been actively involved in the application of sparse matrix techniques to scientific and engineering applications for the last 15 years. In particular, he has been a leader in DOE’s Scientific Discovery through Advanced Computing (SciDAC) program since 2001. He has led a team of computational mathematicians that work closely with domain scientists and develop and apply sparse matrix techniques to solve challenging large-scale DOE scientific problems.

His efforts have accelerated scientific discoveries, which include detecting design defects in accelerator cavities through modeling and simulation for the upgrade of the DOE Continuous Electron Beam Accelerator Facility (CEBAF) at Thomas Jefferson National Accelerator Laboratory; predicting the properties of the Fluorine-14 isotope through simulation before it was detected experimentally in 2010 at the Texas A&M University’s Cyclotron Institute; and understanding the reason why the Carbon-14 isotope (which is used for carbon dating) has the long, useful lifetime. All three examples required the solution of large-scale sparse matrix problems (sparse systems of linear equations and sparse eigenvalue calculations) at the heart of the computation.

Ng is the co-author of more than 50 peer-reviewed technical papers, more than 35 conference papers, and written chapters for nine books on computation. He co-authored the book “Parallel Algorithms for Matrix Computations,” which was published by the Society for Industrial and Applied Mathematics (SIAM).

Prior to joining Berkeley Lab in 1999, Ng led the Computational Methods Group at Oak Ridge National Laboratory, where he also held a joint appointment as an adjunct professor at the University of Tennessee in Knoxville. Ng earned his Ph.D., master’s, and bachelor’s degrees in computer science from the University of Waterloo in Ontario, Canada.

Systems of linear equations arise at the heart of many scientific and engineering applications. Many of these linear systems are sparse; i.e., most of the elements in the coefficient matrix are zero. Direct methods based on matrix factorizations are sometimes needed to ensure accurate solutions. For example, accurate solution of sparse linear systems is needed in shift-invert Lanczos to compute interior eigenvalues. The performance and resource usage of sparse matrix factorizations are critical to time-to-solution and maximum problem size solvable on a given platform. In many applications, the coefficient matrices are symmetric, and exploiting symmetry will reduce both the amount of work and storage cost required for factorization. When the factorization is performed on large-scale distributed memory platforms, communication cost is critical to the performance of the algorithm. At the same time, network topologies have become increasingly complex, so that modern platforms exhibit a high level of performance variability. This makes scheduling of computations an intricate and performance-critical task. In this paper, we investigate the use of an asynchronous task paradigm, one-sided communication and dynamic scheduling in implementing sparse Cholesky factorization (symPACK) on large-scale distributed memory platforms. Our solver symPACK relies on efficient and flexible communication primitives provided by the UPC++ library. Performance evaluation shows good scalability and that symPACK outperforms state-of-the-art parallel distributed memory factorization packages, validating our approach on practical cases.