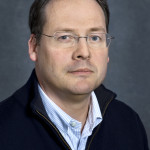 Peter Nugent is a Senior Scientist and Division Deputy for Science Engagement for the Applied Mathematics and Computational Research Division at Lawrence Berkeley National Laboratory. He is also an Adjunct Professor of Astronomy at UC Berkeley

Dr. Nugent attended Bowdoin College and received his M.S. and Ph.D. in physics with a concentration in astronomy from the University of Oklahoma. He joined Lawrence Berkeley National Laboratory in 1996 as a postdoctoral fellow working with Saul Perlmutter on the measurement of the accelerating universe with Type Ia Supernova, for which Dr. Perlmutter received the Nobel Prize in Physics in 2011. He currently runs the largest astrophysical transient discovery pipeline created to-date, the Palomar Transient Factory and was the PI on the early development of the Nyx code used to perform large adaptive mesh refinement hydrodynamical + n-body simulations to calculate the absorption spectra caused by neutral hydrogen in the cosmological environment - a Lyman alpha forest cosmology simulator - for surveys such as BOSS and BigBOSS.

Dr. Nugent has presented his work as a participant on PBS News Hour, NASA's Space Science Update program, CNN, NOVA, NPR, and BBC. His work has also been featured in Time, Newsweek, Science and Nature.