Seismic imaging: Reconstruction of the earth from surface recordings 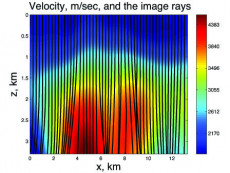 In order to reconstruct seismic velocities from reflected wave surface recordings, common seismic imaging “time-migration” techniques assume horizontal layers. With even mild lateral velocity variations, this significantly distorts subsurface structures. They also produce images in “time migration coordinates”, which gives velocities at points reached by rays from the Earth’s surface at a given time. For laterally varying velocities, the relation between this somewhat unnatural coordinate system and the more appealing Cartesian coordinates can be nontrivial. In contrast, for lateral velocity variations, depth migration effectively produces seismic images in Cartesian coordinates, however its input requires a “velocity model” for the seismic velocity at the underground points. Constructing an adequate velocity model is difficult and time-consuming; instead, one often uses an iterative approach of guesswork followed by correction. We have been able to build fast and robust algorithms to (i) convert time migrated coordinates to depth coordinates and (ii) convert migration velocities to depth velocities. These algorithms allowed imaging of subsurface substructures 3.3 km deep in a North Sea salt dome example with severe lateral variations. 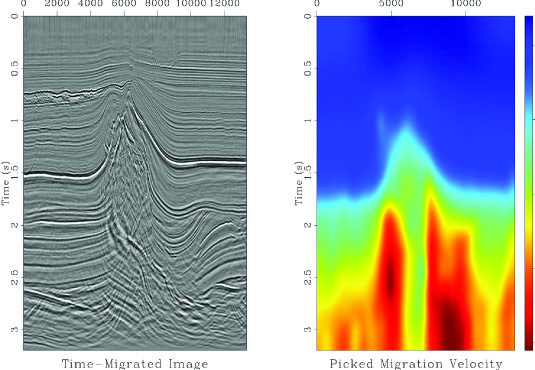