Members of C3 as well as CCSE are studying the Lyman-alpha forest using the massively parallel AMR N-body hydrodynamics code Nyx as part of the SciDAC-3 project titled "Computation-Driven Discovery for the Dark Universe." 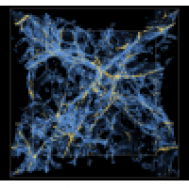 dark energy, dark matter, the masses of neutrinos and their hierarchy, and unique probes of inflation and the early Universe.  Large-scale surveys of the sky are collecting massive amounts of data that hold the key to a deeper understanding of the Universe.  High performance computing is a powerful tool of discovery in extracting insights and making precision predictions for these observations. Next-generation surveys require a much tighter coupling to theory and significantly more end-to-end simulation capability than previous generations of experiment, bringing cosmology in line with the traditions of particle physics. This SciDAC Partnership project brings together a National Laboratory-based collaboration – in partnership with the SciDAC Institutes – to build next generation computational cosmology prediction and analysis frameworks that are directly targeted to current and future observations.