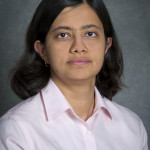 Lavanya Ramakrishnan is a senior scientist at Lawrence Berkeley National Laboratory. She started at the Lab in 2009 as an Alvarez Fellow and has also served as group lead for the Usable Software Systems group. Ramakrishnan has over 15 years of experience working on grants funded from various federal agencies including DOE, NSF, DOD, DARPA in various roles. Her research interests are in building software tools for computational and data-intensive science with a focus on workflow, resource, and data management. More recently, she has been using user research methods to understand as well as verify/validate the context of use and social challenges that often impact tool design and development. She currently leads a number of project teams that consist of a mix of social scientists, software engineers, and computer scientists.

Ramakrishnan has also worked closely with scientists from multiple domains including bioinformatics, biomedical science, storm-surge modeling, weather modeling, high-energy physics, and light source facilities. She has previously worked as a research staff member at Renaissance Computing Institute and MCNC in North Carolina. She has an M.S. and Ph.D. in Computer Science from Indiana University and a bachelor's degree in computer engineering from VJTI, University of Mumbai. She joined Berkeley Lab as an Alvarez Postdoctoral Fellow in 2009.

Scientific software development processes are understood to be distinct from commercial software development practices due to uncertain and evolving states of scientific knowledge. Sustaining these software products is a recognized challenge, but under-examined is the usability and usefulness of such tools to their scientific end users. User research is a well-established set of techniques (e.g., interviews, mockups, usability tests) applied in commercial software projects to develop foundational, generative, and evaluative insights about products and the people who use them. Currently these approaches are not commonly applied and discussed in scientific software development work. The use of user research techniques in scientific environments can be challenging due to the nascent, fluid problem spaces of scientific work, varying scope of projects and their user communities, and funding/economic constraints on projects.

In this paper, we reflect on our experiences undertaking a multi-method user research process in the Deduce project. The Deduce project is investigating data change to develop metrics, methods, and tools that will help scientists make decisions around data change. There is a lack of common terminology since the concept of systematically measuring and managing data change is under explored in scientific environments. To bridge this gap we conducted user research that focuses on user practices, needs, and motivations to help us design and develop metrics and tools for data change. This paper contributes reflections and the lessons we have learned from our experiences. We offer key takeaways for scientific software project teams to effectively and flexibly incorporate similar processes into their projects.

Workflows are increasingly processing large volumes of data from scientific instruments, experiments and sensors. These workflows often consist of complex data processing and analysis steps that might include a diverse ecosystem of tools and also often involve human-in-the-loop steps. Sharing and reproducing these workflows with collaborators and the larger community is critical but hard to do without the entire context of the workflow including user notes and execution environment. In this paper, we describe Science Capsule, which is a framework to capture, share, and reproduce scientific workflows. Science Capsule captures, manages and represents both computational and human elements of a workflow. It automatically captures and processes events associated with the execution and data life cycle of workflows, and lets users add other types and forms of scientific artifacts. Science Capsule also allows users to create `workflow snapshots' that keep track of the different versions of a workflow and their lineage, allowing scientists to incrementally share and extend workflows between users. Our results show that Science Capsule is capable of processing and organizing events in near real-time for high-throughput experimental and data analysis workflows without incurring any significant performance overheads.

Reproducible research is becoming essential for science to ensure transparency and for building trust. Additionally, reproducibility provides the cornerstone for sharing of methodology that can improve efficiency. Although several tools and studies focus on computational reproducibility, we need a better understanding about the gaps, issues, and challenges for enabling reproducibility of scientific results beyond the computational stages of a scientific pipeline. In this paper, we present five different case studies that highlight the reproducibility needs and challenges under various system and environmental conditions. Through the case studies, we present our experiences in reproducing different types of data and methods that exist in an experimental or analysis pipeline. We examine the human aspects of reproducibility while highlighting the things that worked, that did not work, and that could have worked better for each of the cases. Our experiences capture a wide range of scenarios and are applicable to a much broader audience who aim to integrate reproducibility in their everyday pipelines.

Scientific exploration generates expanding volumes of data that commonly require High Performance Computing (HPC) systems to facilitate research. HPC systems are complex ecosystems of hardware and software that frequently are not user friendly. The Usable Data Abstractions (UDA) project set out to build usable software for scientific workflows in HPC environments by undertaking multiple rounds of qualitative user research. Qualitative research investigates how individuals accomplish their work and our interview-based study surfaced a variety of insights about the experiences of working in and with HPC ecosystems. This report examines multiple facets to the experiences of scientists and developers using and supporting HPC systems. We discuss how stakeholders grasp the design and configuration of these systems, the impacts of abstraction layers on their ability to successfully do work, and the varied perceptions of time that shape this work. Examining the adoption of the Cori HPC at NERSC we explore the anticipations and lived experiences of users interacting with this system's novel storage feature, the Burst Buffer. We present lessons learned from across these insights to illustrate just some of the challenges HPC facilities and their stakeholders need to account for when procuring and supporting these essential scientific resources to ensure their usability and utility to a variety of scientific practices.

Increasingly Jupyter tools are being adopted and incorporated into High Performance Computing (HPC) and scientific user facilities. Adopting Jupyter tools enables more interactive and reproducible computational work at facilities across data life cycles. As the volume, variety, and scope of data grow, scientists need to be able to analyze and share results in user friendly ways. Human-centered research highlights design challenges around computational notebooks, and our qualitative user study shifts focus to better characterize how Jupyter tools are being used in HPC and science user facilities today. We conducted twenty-nine interviews, and obtained 103 survey responses from NERSC Jupyter users, to better understand the increasing role of interactive computing tools in DOE sponsored scientific work. We examine a range of issues that emerge using and supporting Jupyter in HPC ecosystems, including: how Jupyter is being used by scientists in HPC and user facility ecosystems; how facilities are purposefully supporting Jupyter in their ecosystems; feedback NERSC users have about the facility’s deployment, and, discuss features NERSC indicated would be helpful. We offer a variety of takeaways for staff supporting Jupyter at facilities, Project Jupyter and related open source communities, and funding agencies supporting interactive computing work.

Scientific datasets are continually expanding and changing due to fluctuations with instruments, quality assessment and quality control processes, and modifications to software pipelines. Datasets include minimal information about these changes or their effects requiring scientists manually assess modifications through a number of labor intensive and ad-hoc steps. The Deduce project is investigating data change to develop metrics, methods, and tools that will help scientists systematically identify and make decisions around data changes. Currently, there is a lack of understanding, and common practices, for identifying and evaluating changes in datasets since systematically measuring and managing data change is under explored in scientific work. We are conducting user research to address this need by exploring scientist's conceptualizations, behaviors, needs, and motivations when dealing with changing datasets. Our user research utilizes multiple methods to produce foundational, generative insights and evaluate research products produced by our team. In this paper, we detail our user research process and outline our findings about data change that emerge from our studies. Our work illustrates how scientific software teams can push beyond just usability testing user interfaces or tools to better probe the underlying ideas they are developing solutions to address.