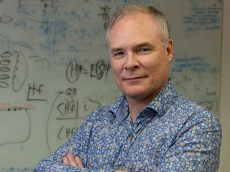 “Diversifying the computing community is important to me, and the reality is that a lot of young people who consider pursuing careers in these fields don’t see that they fit or feel like they belong. That’s a big challenge,” said de Jong. “At this point, I strongly believe that a part of the solution is equity, meaning we need to spotlight these underrepresented voices and give them a bigger platform to stand on.”

To elevate these perspectives, de Jong will appoint specialist editors that are gender and culturally diverse, which means seeking out experts from typically overlooked parts of the world like Africa, South America, Southeast Asia, etc. He also hopes to publish more “special issues” of CPC to highlight the innovative research being done in these parts of the globe and from experts not typically represented in the journal.

De Jong’s background is computational chemistry, and his research at Berkeley Lab spans quantum computing, exascale computing, and machine learning for chemistry and materials research. In addition to his role as department head, de Jong also leads Berkeley Lab’s  Applied Computing for Scientific Discovery Group, which advances scientific computing by developing and enhancing applications in key disciplines, as well as tools and libraries for addressing general problems in computational science.