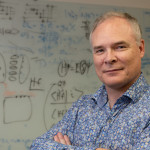 He currently serves as the Interim Department Head for Computational Sciences.

de Jong is the deputy director of the Quantum Systems Accelerator, which is part of the National Quantum Initiative. In addition,de Jong is the team director of the Accelerated Research for Quantum Computing (ARQC) Team AIDE-QC, funded by DOE ASCR, focused on developing software stacks, algorithms, and computer science and applied mathematics solutions for chemical sciences and other fields on near-term quantum computing devices. He is also a co-PI on the ARQC team FAR-QC (led out of Sandia). He is also part of LBNL’s quantum testbed, developing superconducting qubits. He is the LBNL lead for the BES QIS project (led out of PNNL), where he is focusing on new approaches for encoding wave functions and embedding quantum systems. Prior to this, de Jong was the director of the LBNL Quantum Algorithms Team QAT4Chem.

de Jong is a co-PI within the DOE ASCR Exascale Computing Project (ECP) as the LBNL lead for the NWChemEx effort, contributing to the development of an exascale computational chemistry code. He is the LBNL lead for the Basic Energy Sciences SPEC Computational Chemistry Center (led out of PNNL), where he is working on reduced scaling MCSCF and beyond GW approaches for molecules. He is also a co-PI on the BES Rare Earth Project, where he focuses on using machine learning and computational chemistry to discover new materials for rare earth separation.

He leads an effort on machine learning for chemical sciences, focused on developing deep learning networks (GANs and autoencoders) for the prediction of structure-function relationships and is developing approaches for inverse design. As part of this effort, his team developed the ML4Chem Python package.

de Jong publication record, citations and H-index can be found on Google Scholar or Publons. He is the Founding Editor-in-Chief for the IOP journal Electronic Structure, and a Specialist Editor for Computer Physics Communications.

The Hartree-Fock (HF) method is the fundamental first step for incorporating quantum mechanics into many-electron simulations of atoms and molecules, and it is an important component of computational chemistry toolkits like NWChem. The GTFock code is an HF implementation that, while it does not have all the features in NWChem, represents crucial algorithmic advances that reduce communication and improve load balance by doing an up-front static partitioning of tasks, followed by work stealing whenever necessary. To enable innovations in algorithms and exploit next generation exascale systems, it is crucial to support quantum chemistry codes using expressive and convenient programming models and runtime systems that are also efficient and scalable. This paper presents an HF implementation similar to GTFock using UPC++, a partitioned global address space model that includes flexible communication, asynchronous remote computation, and a powerful multidimensional array library. UPC++ offers runtime features that are useful for HF such as active messages, a rich calculus for array operations, hardware-supported fetch-and-add, and functions for ensuring asynchronous runtime progress. We present a new distributed array abstraction, DArray, that is convenient for the kinds of random-access array updates and linear algebra operations on block-distributed arrays with irregular data ownership. We analyze the performance of atomic fetch-and-add operations (relevant for load balancing) and runtime attentiveness, then compare various techniques and optimizations for each. Our optimized implementation of HF using UPC++ and the DArrays library shows up to 20% improvement over GTFock with Global Arrays at scales up to 24,000 cores.