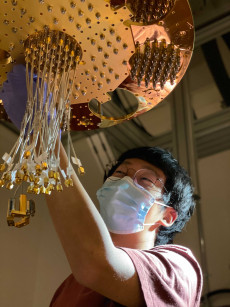 Researcher Yosep Kim during the pre-installation of the superconducting QPU for the experiment. (Credit: Yosep Kim/Berkeley Lab)

Noisy intermediate-scale quantum processors typically support one- or two-qubit native gates, the types of gates that can be implemented directly by hardware. More complex gates are implemented by breaking them up into sequences of native gates. The team's demonstration adds a novel and robust native three-qubit iToffoli gate for universal quantum computing. Furthermore, the team demonstrated a very high fidelity operation of the gate at 98.26%. The team’s experimental breakthrough was published in Nature Physics this month.

The Toffoli or the controlled-controlled-NOT (CCNOT) is a key logical gate in classical computing because it is universal, so it can build all logic circuits to compute any desired binary operation. Furthermore, it is reversible, which allows the determination and recovery of the binary inputs (bits) from the outputs, so no information is lost.

In quantum circuits, the input qubit can be in a superposition of 0 and 1 states. The qubit is physically connected to other qubits in the circuit, which makes it more difficult to implement a high-fidelity quantum gate as the number of qubits increases. The fewer quantum gates needed to compute an operation, the shorter the quantum circuit, thereby improving the implementation of an algorithm before the qubits decohere causing errors in the final result. Therefore, reducing the complexity and running time of quantum gates is critical.

In tandem with the Hadamard gate, the Toffoli gate forms a universal quantum gate set, which allows researchers to run any quantum algorithm. Experiments implementing multi-qubit gates in major computing technologies – superconducting circuits, trapped ions, and Rydberg atoms – successfully demonstrated Toffoli gates on three-qubit gates with fidelities averaging between 87% and 90%. However, such demonstrations required researchers to break up the Toffoli gates into one- and two-qubit gates, making the gate operation time longer and degrading their fidelity.

To create an easy-to-implement three-qubit gate for the experiment, AQT designed an iToffoli gate instead of a conventional Toffoli gate with a phase rotation of “i” on the third (last) qubit by applying simultaneous microwave pulses fixed at the same frequency to three superconducting qubits in a linear chain.

The experiment demonstrated, similarly to the Toffoli gate, that this three-qubit iToffoli gate can be used to perform universal quantum computation with high fidelity. Furthermore, researchers showed that the gates schematic on superconducting quantum processors could produce additional three-qubit gates, which provide more efficient gate synthesis–the process of breaking up quantum gates into shorter ones to improve circuit running times.

Yosep Kim, one of the leading researchers in the experiment and a former postdoc at AQT, is currently a senior scientist at the Korea Institute of Science and Technology (South Korea).

"As a result of decoherence, we know that a longer and more complex gate sequence hurts the fidelity of the results, so total gate operation time to execute a certain algorithm is significant. The demonstration proved that we can implement a three-qubit gate in one step and reduce the circuit depth (the length of the sequence of gates) of a gate synthesis. Furthermore, unlike previous approaches, our gate scheme does not include the qubit's higher excited states prone to decoherence, therefore resulting in a high-fidelity gate,” said Kim.

“I am still highly impressed by the simplicity and the fidelity of this iToffoli gate. Now, using a three-qubit operation like the one in the work can significantly speed up the development of quantum application and quantum error correction,” said Alexis Morvan, a former postdoc at AQT and currently a research scientist at Google.

“I studied quantum information science using a photonics system during my doctorate, so I didn't have a good knowledge to conduct the experiment in a superconducting processor," said Kim. "But because the experimental testbed is so well established and there are many interdisciplinary colleagues who know the inner workings of the setup and collaborated in the experiment, I was able to jump into the experiment very quickly without much previous experience. If it weren't for AQT's platform and team, I don’t think my ideas would have been realized at such a high level.” 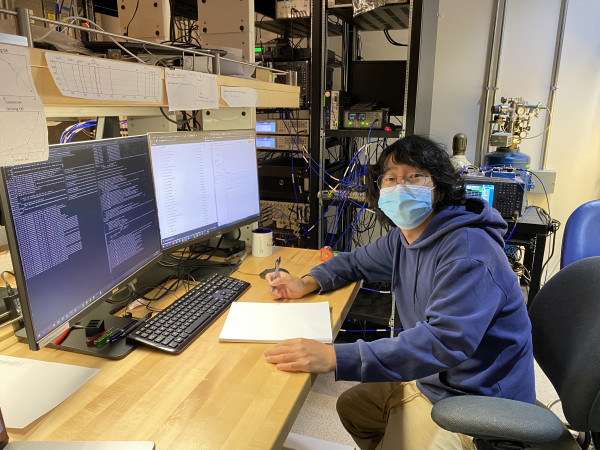 “AQT provides researchers and users a fantastic opportunity to collaborate with people coming from different backgrounds and with varied interests. This iToffoli project is one such example of a cross-pollination of ideas. So, in addition to the spirit of scientific freedom at AQT, our work was also accelerated by the well-established infrastructure and constant calibration, allowing us to focus on the physics of our specific project without digressing on peripheral tasks. Furthermore, an advanced control stack enabled us to explore all possible implementations to establish novel quantum protocols,” said Long Nguyen, a current postdoc at AQT.