Where does electrical activity recorded on the surface of the brain come from, and what exactly determines which electrical signals get recorded? Using simulations run at the National Energy Research Scientific Computing Center (NERSC), a team of researchers at Lawrence Berkeley National Laboratory (Berkeley Lab) has zeroed in on answers to these questions, finding the origin of the cortical surface electrical signals and why the signals originate where they do. Their results were published in The Journal of Neuroscience in May. 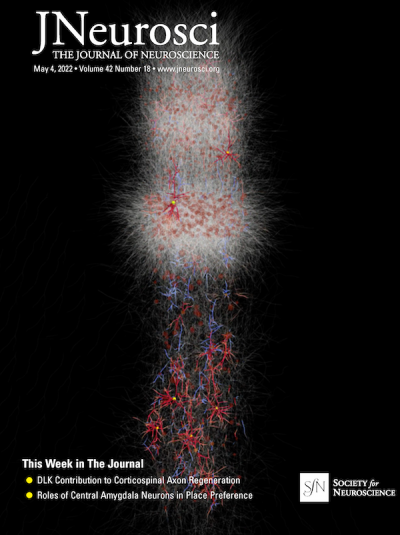 Rendering of a full-scale biophysically detailed model of a cortical column. The simulation had ~30,000 neurons and ~30,000,000 compartments. The color indicates the flow of current through compartments. The visualization was created by Burlen Loring, Lawrence Berkeley National Laboratory. (Credit: The Journal of Neuroscience)

Neurosurgeons have long used electrocorticography (ECoG) – electrode sensors placed directly on the surface of the brain during neurosurgery, which record a particular type of electrical signal – to localize where seizures are originating and study how the human brain works. ECoG has yielded insights into how brain dynamics produce perception, behavior, and cognition in humans and shows great promise for interactions between machines and the brain. However, the sources of the recorded signals and how those sources are distributed has remained a mystery.

In a seven-year process – including developing new ECoG devices, performing brain surgery on rats to record their neurological signals, developing new machine-learning algorithms to process the data, and running a full-scale biophysically accurate simulation at NERSC – Berkeley Lab Computational Biosciences Group Lead Kris Bouchard and his team found answers to many of these questions, establishing a new understanding of which neurons, precisely, are generating the recorded signals and paving the way for further research and clinical work. Vyassa L. Baratham, Maximilian E. Dougherty, and John Hermiz from Berkeley Lab, Michel M. Maharbiz from UC Berkeley, and Peter Ledochowitsch of Canary, LLC are also featured as authors of the paper.

Using ECoG during neurosurgery, “[researchers] record signals, but they don’t know what neurons in the brain are generating those signals,” said Bouchard. “ECoG is an aggregate, mesoscale signal, and the lack of a deeper, more precise understanding of what is generating that signal hinders the ability to use it both for clinical applications and as a basic neuroscience tool.”

To isolate the source of the signals, the team used a model to simulate a single cortical column of the brain – a recurring module of organization of the cortex composed of tens of thousands of densely interconnected neurons. Each column is organized into five to six layers composed of different types of neurons. According to the new findings, neurons in cortical layers V and VI – those located deepest in the brain – produce about 85% of the electrical signals picked up by ECoG. This is counterintuitive because the neurons with the largest contribution would typically be expected to come from layers closest to the ECoG sensors, which are on the surface of the brain. However, further investigation showed that distance is only a minor factor in the strength of the signal; rather, the layers deepest in the brain have the most neurons, and those neurons are the most likely to fire simultaneously, which contribute to strong signals coming from those deeper layers of the brain.

Bouchard and his team used the Cori supercomputer at NERSC and a software package known as NEURON to simulate the differential equations that describe individual neurons, and connected the neurons with cortical column details derived from the Human Brain Project and the Blueprint Project. Ultimately, the project simulated 30 million interconnected neuronal segments of a single cortical column and showed how signals flowed through the tissue over the course of 60 seconds at high resolution. These simulations used up to 2,646 nodes (180,000 compute cores) concurrently on Cori – the first time this type of simulation has been used to understand ECoG signals.

“This paper advances fundamental knowledge of the biophysical origins of a recorded signal used to understand how the human brain works and to treat human illness, ” said Bouchard. “With this knowledge, we can get more precise information from the human brain as well as from animal models, and more directly link studies in animal models with studies in the human brain. Because we now know which neurons are being recorded by ECoG, we can study those very specific neurons in animal models and make predictions about what we would expect to see in the human case with this less resolved recording technology.”

And it’s just the beginning. Upcoming work will connect cortical columns with their neighbor columns, offering a more holistic and accurate view of the detailed results; a separate project is training deep neural networks to infer the parameters of single neurons from indirect measurements.

“One thing we’re particularly interested in doing is to take the simulation that we currently have and replicate it – replicate that column, and connect it to columns around it, to get a broader perspective on how more brain tissue is generating signals that are recorded at the surface. We hypothesize that different frequency ranges in the recorded ECoG signal are biomarkers of activity in different layers,” said Bouchard. “Because neurons in different layers perform different computations, having access to signals that reflect those computations from the human brain would be a game-changer.”

The paper is also the fruition, seven years in the making, of a series of partnerships investing in brain science at Berkeley Lab. Motivated by the US BRAIN Initiative, beginning in 2015 as part of a cross-institutional collaboration between Berkeley Lab, University of California San Francisco, and UC Berkeley, and born out of the Laboratory Directed Research and Development program, this project represents results of collaboration between the Computing Sciences and Biosciences Areas and the Computational Biosciences Group within Berkeley Lab’s Scientific Data division. The computations were supported by an allocation of computer time from the NERSC Director’s Discretionary Reserve.

Bouchard says this type of collaboration – cutting-edge experimental science backed up by high-powered computing and a broad range of other resources and disciplines – is the beauty of working in the national lab system.

“Things take time to come to fruition when they involve brain surgeries in live animals, and this is an example of the fruits that have been born of those early investments by the Lab,” said Bouchard. “This is a shining example of the kind of real cross-disciplinary science that can be done at a national lab because it combines new experimentation coupled with the resources that are unique to a national lab, like high-powered computing. We’re using DOE high-powered computing resources to address problems in the health space that are simply intractable without these unique facilities.”