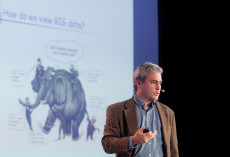 Michael Mahoney is the new group leader for Machine Learning and Analytics.

When the term “big data” was first coined in the late 1990s, the world produced about 1.5 quintillion bytes of data per year. And the largest scientific datasets were only several hundred gigabytes – an amount of data that a modern smartphone could store.

Since then, big data has gotten exponentially bigger. Today, the world generates more than 2.5 quintillion bytes of data daily. And international scientific experiments like the Large Hadron Collider have collected almost 280 petabytes of data in the last decade – equivalent to streaming Nextflix 24/7 for more than 15,000 years.

As modern science experiments produce more data than an army of humans could ever sift through, scientists are increasingly relying on machines to help them make sense of this deluge. Inspired by this shift, Berkeley Lab’s Scientific Data Division recently appointed Michael Mahoney to lead its Machine Learning and Analytics Group.

“My work focuses on the applied mathematics of data, particularly on the algorithmic and statistical foundations of modern large-scale machine learning and data analysis,” said Mahoney.

“This opportunity at Berkeley Lab was really attractive because it is generally very challenging to do interdisciplinary work if you want to work on real theory and methods and apply those solutions to real challenges in science,” said Mahoney. “This is where Berkeley Lab is unique. Its machine learning expertise is reasonably well-established, and its tradition of team science means that we can work with researchers to apply these methods to scientific problems.”

According to Mahoney, many modern machine learning tools are designed for Internet and social media problems. More recently, there has been a lot of interest in developing machine learning methods for commercial applications such as self-driving cars, large-scale supply chain systems, etc. While these challenges complement those in science in some ways, they are very different in other ways.

“The opportunity to look at how we can apply some of these machine learning solutions to not just one or two scientific areas but more broadly is nice because it’s an interesting set of problems that Berkeley Lab is particularly well-positioned to explore,” said Mahoney. “I also see this moment as an opportunity to make big advances in both machine learning for science and scientific machine learning, as well as to answer open questions about what the National Labs and Department of Energy could be doing in this space.”

In addition to his work at Berkeley Lab, Mahoney will continue his research efforts at UC Berkeley, the International Computer Science Institute (ISCI), and the Real-Time Intelligent Secure Explainable Systems (RISElab), as well as teach classes in UC Berkeley’s Department of Statistics.