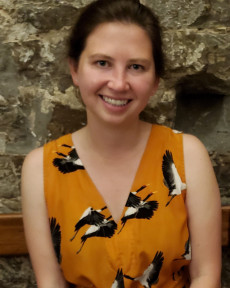 When Lindsay Bassman began her postdoctoral fellowship in the Applied Computing for Scientific Discovery group at Berkeley Lab, she had a Ph.D. in physics, was an experienced programmer, and was skilled at running scientific supercomputer simulations. She hoped the Lab could help her find some good applications for these talents.

She soon found a collaborator in fellow postdoc Katie Klymko (now staff at NERSC), who had a background in statistical mechanics. Together they worked on creating novel quantum algorithms to extract materials and chemical properties from simulations on quantum computers. For example, they developed a new algorithm to compute a material’s free energy on a quantum computer.

Now Bassman has been awarded one of Europe’s most competitive and prestigious postdoctoral fellowships — the Marie Skłodowska-Curie Actions — to continue this work in quantum thermodynamics with Michele Campisi at the CNR Istituto Nanoscienze in Pisa, Italy.

“Before joining Berkeley Lab, I didn’t know anything about the field of quantum thermodynamics. I didn’t fully grasp or appreciate how cool and deep of a physical theory it is; I didn’t understand the open questions about how it could extend classical thermodynamics to quantum systems,” said Bassman. “Our free-energy algorithm showed me the beauty of quantum thermodynamics. Free energy is the central property of a material. If you know the system’s free energy, you can compute any of its other equilibrium properties. It helps us understand how things evolve and play out.”

In addition to Klymko, Bassman credits being in the Applied Computing for Scientific Discovery Group led by Bert de Jong for inspiring her newfound interest in quantum thermodynamics. “I think what’s special about Berkeley Lab is that all our research is open science, we don’t need security clearance, it’s easy to collaborate with other scientists and I’ve been able to work on what interests me, so long as it falls under the umbrella of our quantum algorithm and software funding,” she said. “That has enabled me to thrive and succeed.”

Because Bassman began her postdoctoral work in June 2020, she spent most of her Berkeley Lab career working remotely. Fortunately, she was very adept at collaborating over zoom. In her two years at the Lab, Bassman was the lead author on four papers and has contributed as a co-author to a handful of other papers published by collaborators at Berkeley Lab and other institutions.

Math and science were Bassman’s favorite classes when she was growing up, but she didn’t realize that being a scientist was a job that she could do. So she took a job in financial technology shortly after earning her undergraduate degree in computer science. She only learned about research careers while pursuing her Ph.D. in physics at the University of Southern California.

“What I love about research is the prospect of discovering something new. You’re the only one who knows something for a small moment in time,” said Bassman. “I also love that in doing research, you are required to continue learning and keep up with what everyone in your field is doing. A lot of the progress in my field is building on what another person has just discovered.”

With this new fellowship, Bassman looks forward to exploring Europe, learning Italian, and expanding her career in research.

“During her time at Berkeley Lab, Lindsay has developed into an exceptional researcher who embodies the Lab’s team science ethos,” said de Jong. “This prestigious award is a testament to her novel research. We will miss her enthusiasm, but we will continue collaborating with her once she lands in Italy.”