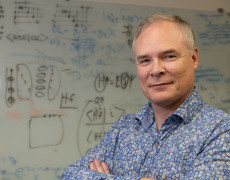 Established in 2016, OSELP is a distinguished Fellowship Program that brings together exceptional leaders to explore the complexities, challenges, and opportunities facing the National Lab system and the Department of Energy (DOE). Candidates are nominated by national lab directors, assessed by a committee of former national lab directors and former senior DOE officials, and accepted into the program by the National Laboratory Directors’ Council (NLDC).

“It is an honor to be selected as the 2023 OSELP fellow from Berkeley Lab,” said de Jong. “I look forward to joining the network of OSELP fellows and mentors to gain deeper insights into the operation of national laboratories, as well as the challenges and opportunities within the DOE lab system. It is a great opportunity to build new collaborations with my cohort fellows and learn from them.”

In addition to his role as QSA Deputy Director, de Jong is also the director of the multi-institution Accelerated Research for Quantum Computing project AIDE-QC, and he is co-PI on multiple projects, including the DOE ASCR Exascale Computing Project's NWChemEx effort, BES SPEC Computational Chemistry Center, and BES Quantum Information Science, and AI-driven Rare Earth and Carbon Capture projects. He is the Founding Editor-in-Chief of the IOP journal Electronic Structure and a Principal Editor for Computer Physics Communications.