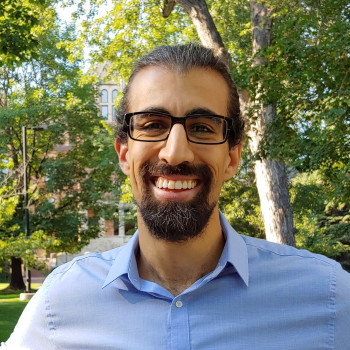 Applied mathematics has been a passion of Osman Malik’s for much of his life. Even when he was pursuing other interests, “it always just pulled me back,” said the newest Alvarez Fellow, who joined the Applied Math and Computational Research Division's Scalable Solvers Group at Berkeley Lab on September 1. His mentor is CRD senior scientist Chao Yang.

Malik, originally from Sweden, earned a Ph.D. in applied mathematics from the University of Colorado at Boulder in August of this year. This followed a Master’s in applied mathematics from the University of Washington in 2016 and a Master’s in mathematics and finance from Imperial College London in 2012. Prior to that, he earned a bachelor’s degree in industrial engineering and another in economics. He has also spent time in the commercial sector, working for a bank at one point and for a startup at another.

Malik’s affinity for math stems from the fact that “it can be used to understand something somewhere else,” whether in computer science, physics, finance, or a multitude of other fields, he noted. “I think what originally got me interested in math was applications like physics. It could help you understand things. Even when I was doing my studies in mathematical finance it was a similar thing – trying to understand the ways that finance and stocks work and how to model them.”

Math has led him into a variety of focused research areas as well. While pursuing his Ph.D., for example, he interned at IBM Research, where he developed a graph neural network method for time-varying graphs. He was also a research intern at Fujitsu Research of America, where he developed an algorithm for binary matrix factorization that can be run on Fujitsu’s Digital Annealer, designed to solve combinatorial optimization problems. Both of these internships resulted in patent applications and papers, one published and one currently under review for publication.

From Tools to Applications

With a strong interest in machine learning and data science, Malik’s Ph.D. thesis focused in part on developing randomized algorithms for tensor decomposition and matrix computation. Tensors, which have become very popular in machine learning, are essentially multi-dimensional boxes in which numbers or other kinds of data can be stored, he explained.

“Tensor decomposition is a tool that can be used to compress data to reduce storage space, or to find structure in the data that you can use for some kind of prediction, or for other kinds of machine learning tasks,” Malik said. “I have an eye toward machine learning and data science, so those are the applications that motivate my research.”

He is also interested in applied engineering. In the last year of his Ph.D., Malik started working with multi-fidelity approximation as a “workaround” for computer models that can be too expensive because they need to be run multiple times in order to glean information about the output.

“Multi-fidelity approximation is essentially saying ‘it is too expensive to run this model a ton of times,’ so instead we’ll run it a few times and add in a ‘cheap’ model that we can afford to use many times, then combine the two and still get a good approximation,” Malik explained.

While at the lab, he is looking forward to taking his growing expertise in these areas into other applications and science domains.

“During my Ph.D. I was more tools-focused, so I’m excited to be in a place where I get to be around a lot of domain scientists who work on applications, especially in machine learning,” he said. “I’m hoping to branch out and apply these tools that I’ve learned about to different scientific areas and other fields and leverage other peoples’ knowledge.”

“I am extremely impressed with the breadth and depth of Osman's research accomplishments,” Yang said. “His work on tensor decomposition using randomized algorithms will enable scientists to represent and analyze high-dimensional data efficiently. His research will have a direct impact on several DOE science applications, such as solving quantum many-body problems and harnessing large volumes of experimental data.”

Even with so many accomplishments already under his belt, Malik considers being chosen for the Alvarez Fellowship to be one of the biggest achievements of his career so far.

“It is a really big deal, and I’m extremely excited and happy to get it,” he said, smiling broadly. “I think definitely it is going to be a huge help in the future. I definitely want to continue doing research, and the Alvarez Fellowship will be a great springboard for that.”

In the mean time, he is looking forward to being able to visit his home country in the near future and relocating from Boulder to Berkeley when the pandemic restrictions have eased. “Since I’m from Sweden, I’ve been wanting to go back for a while and I haven’t been able to,” he said. “Hopefully travel is something we’ll be able to do again soon – it’s something I’m really looking forward to.”