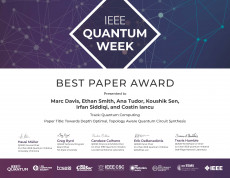 A team of researchers that includes Costin Iancu and Irfan Siddiqi of the Computational Research Division (CRD) at Lawrence Berkeley National Laboratory (Berkeley Lab) was honored with a best paper award on October 14 at the 2020 IEEE International Conference on Quantum Computing and Engineering (QCE).

The paper, co-authored by Marc Grau Davis, Ethan Smith, Ana Tudor, and Koushik Sen of UC Berkeley, in addition to Siddiqi and Iancu, was one of two best papers selected in the Quantum Computing Track at QCE20. Their work, “Towards depth-optimal, topology-aware quantum circuit synthesis,” introduces a software package that can compile the source code of a quantum program to run as efficiently as possible on a quantum computer.

“We believe that empirical tools like ours can facilitate algorithmic exploration, gate set discovery for quantum processor designers, as well as provide useful optimization blocks within the quantum compilation tool-chain,” the researchers wrote.

CRD Director David Brown said this award is a well-deserved recognition of the group’s rapid achievements in this field.

“It is impressive to see that in a few short years this team has gone from the early stages of quantum computing research to receiving this best paper award,” Brown said.

Given the intense computational nature of quantum compilation, this research also showcases the value of collaboration between Berkeley Lab’s interdisciplinary Quantum Information Systems and Computing Sciences Area teams, Iancu added. The work was funded by the Advanced Quantum Testbed at Berkeley Lab.