Just a few years ago, neurophysiology researchers did not have a standard data format for their results. This made collaborations across laboratories inefficient, direct comparison of findings difficult, and the re-use of scientifically rich data almost impossible.

That’s why a team of researchers at Lawrence Berkeley National Laboratory (Berkeley Lab), Allen Institute for Brain Science, and multiple neuroscience labs developed Neurodata Without Borders: Neurophysiology (NWB:N), a data standard for neurophysiology research and a software ecosystem that allows neuroscientists to share, archive, use, and build tools for analyzing data. Over the past year, this tool has been gaining traction in the neuroscience community.

Last month, the Allen Institute released its first – and the world’s largest – dataset of electrical brain activity in the NWB:N 2.0 ecosystem. The NWB team also played a big role at the Society for Neuroscience meeting. In addition to holding two demos of NWB technologies in the INCF booth, they also presented two posters and participated in the “Tools & Tech: A BRAIN Initiative Alliance Social,” where they talked to researchers about NWB:N.

“Neuroscience is a rapidly developing field with groundbreaking, new methods coming online every year,” says Ryan Ly, a Berkeley Lab computer systems engineer and a core developer for NWB:N. “To support the data types generated by these methods, we provide tools to help users extend the NWB:N standard to meet their data needs.” 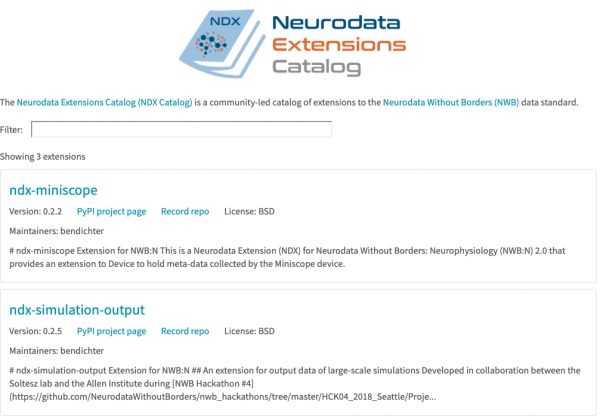 NWB:N is also currently under review to become an INCF supported best practice. If this happens, the tool would be recommended to researchers around the world. In addition, Berkeley Lab’s Andrew Tritt, lead architect of the PyNWB API, and Benjamin Dichter, NWB Community Liaison, are presenting NWB at a data management workshop in Norway in November. Several other training and development events are planned for 2020, including two hackathons and tutorials at Cosyne 2020 and the INCF conference.

“The 2.0 version of NWB:N just came out in January 2019, and we are now working with users to get this standard adopted across the neuroscience community. Attending these conferences, presenting posters, and hosting tutorials and hackathons are a big part of that,” says Oliver Rübel, a research scientist in Berkeley Lab’s Computational Research Division (CRD) who has been instrumental in the development of NWB:N. “It’s exciting to see this tool being so well received by the research community.”

In addition to Rübel, Tritt, Ly, and Kristrofer Bouchard (Biosciences/CRD) led the software development of NWB:N 2.0, with support from the Allen Institute and the broader NWB community, including Loren Frank and Edward Chang (UCSF). This research is supported by the NIH BRAIN Initiative and the KAVLI Foundation.