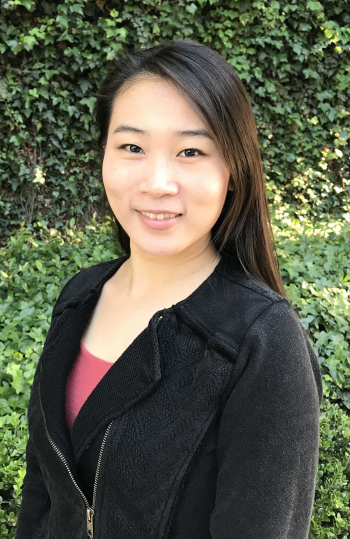 Envisioning the future, Zhi (Jackie) Yao, Berkeley Lab’s 2019 Luis W. Alvarez Fellow in Computing Sciences, sees the end of Moore’s Law as the beginning of her research. Yao’s focus as a postdoctoral researcher in the Electrical and Computer Engineering (ECE) Department at the University of California, Los Angeles (UCLA) over the past few years has been on developing unprecedented numerical modeling to solve complex multiphysics problems involving electromagnetics, nonlinear magnetics, and acoustics.

“With technology trending towards miniaturization and interconnection, the continuous scaling down of circuitry is pushing Moore’s Law in the semiconductor industry nearly to an end and has entailed novel materials and new techniques to generate nanoscale devices with desired performance,” says Yao, who joined the Center for Computational Sciences and Engineering (CCSE) on November 11. Yao will be mentored by CCSE Group Lead Ann Almgren.

The new materials and techniques Yao sees on the scientific horizon involve multiple physical mechanisms — specifically, magnetic spins to control and manipulate electromagnetic (EM) signals in radio-frequency (RF) circuitry, with exceptional scalability and low power dissipation. However, the design of RF magnetic devices has been hindered by the lack of an effective modeling tool to tackle the interaction between oscillating magnetization and EM waves. From Yao’s perspective, this problem is primarily due to the inherent disparity in time and length scale between magnetic spin oscillations and EM waves. “In order to fully understand the underlying physics and design the next-generation devices, a new, multiphysics modeling approach is needed,” she says.

Yao hopes her modeling tool can provide a pathway to engineer light-matter interaction of critical importance to future devices and computation methods. Her approach addresses the existing modeling problems by giving electronics designers a clear path toward figuring out how potential materials would be best used in communication devices.

Yao earned both her M.S. and Ph.D. degree in the ECE Department at UCLA. During her graduate and postdoc research, she developed a numerical solver unifying dynamic electromagnetics, nonlinear magnetic spin dynamics, and acoustics. The solver is one of the key contributions to the sustainability of the National Science Foundation’s Center for Translational Applications of Nanoscale Multiferroic Systems, headquartered at UCLA. Yao has received multiple academic honors, such as the first place Best Student Paper in the International Microwave Symposium, IEEE Antennas and Propagation Society Doctoral Research Grant, Qualcomm Innovation Fellowship, Outstanding Master’s Thesis at ECE UCLA, and first place in Ph.D. exam at ECE UCLA.

In her free time, Yao enjoys painting, a passion that almost became her profession before she became intrigued with engineering and computer science as an undergraduate. “I love to paint and find that it’s a nice counterpoint to computing and engineering,” she says.