Painting cars is one of the biggest energy expenditures in the United States, accounting for .01 percent of all energy nationwide. For automotive plants, it is by far the largest use of energy, averaging about 70 percent of the plant’s total. Paint producers play a vital role in helping curb this energy usage, researching and implementing  advances in paint technology.

As one of the world’s largest paint manufacturers, PPG has a vested interest in increasing energy efficiency through paint design. PPG is moving forward on this front through a U.S. Department of Energy (DOE) program that fosters research partnerships between industry and national labs — High Performance Computing for Manufacturing (HPC4Mfg). Through HPC4Mfg, in 2017 PPG connected with applied mathematicians in Berkeley Lab’s Computational Research Division (CRD) and they’re now collaborating on computational models that will help optimize paint design and application to reduce energy consumption.

In the automotive manufacturing setting, cars are painted via a device called an electrostatic rotary bell atomizer. Within the atomizer, paint flows to a cup rotating at speeds of 10,000 to 70,000 rpm and then, driven by centrifugal forces, the paint sheets across the inside surface of the cup, atomizing into droplets at the edge. Cars are painted in a specialized “spray booth” and then go through an oven the length of a football field where the paint sets. Both of these areas must be tightly humidity- and temperature-controlled and thus use huge amounts of energy. Since the industry wants to minimize the amount of time the cars spend in those two rooms, painting faster would seem to be one part of the solution. But the liquid dynamics of paint are complicated; when the delivery rate of paint going into the atomizer is increased, bigger droplets come out of the device, which has a negative effect on the paint performance properties. 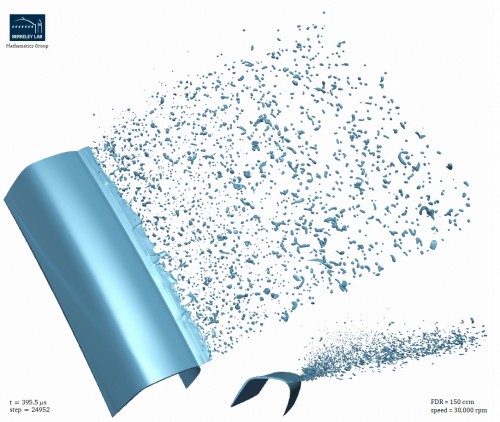 High-resolution petascale modeling of liquid atomization, showing a thin film of liquid (blue) traveling up the inside surface of the cup (the modeling domain is a small wedge), over the beveled edge of the bell, and then detaching into a sheet that subsequently breaks up into thousands of droplets. The side-on view shows how the droplets are pushed up by shaping air currents. Image: Robert Saye

PPG sought to understand the key mechanisms driving the atomization process so they could reduce energy consumption and increase paint flow rates without reducing process quality. Though PPG has its own research team and in-house facilities for experimental characterization of spray behavior, the opportunity to couple with Berkeley Lab expertise in computational fluid mechanics and high performance computing (HPC) presented a unique opportunity to bring a cross-disciplinary approach to these challenges.

The DOE’s HPC4Mfg program offers a low-risk path for U.S. manufacturing companies interested in adopting HPC technology to advance clean energy technologies and increase energy efficiency. “This was an opportunity for us to advance our understanding of the relationship between the properties of our paints and the spray application process,” says Reza Rock, a group leader in PPG’s Applied Coatings Science division. “It’s a really critical problem for us and the industry as a whole.”

PPG was matched with Robert Saye, a member of CRD’s Mathematics Group and an expert in developing state-of-the-art algorithms in computational fluid mechanics, and James Sethian, head of the Mathematics Group and an expert in devising numerical methods to track moving interfaces. “We were interested in computational experiments that would allow us to probe material properties at a more fundamental level,” says Rock. “Looking at things like the interactions between the fluid properties of the paints, how much fluid we’re putting out through them, and the speed of the rotating cup in the atomizer.”

Since joining forces, PPG and Berkeley Lab have been developing an advanced, tailor-made HPC numerical framework to study rotary bell atomization at industrially relevant conditions, a process that will require millions of CPU hours on Berkeley Lab’s National Energy Research Computing Center (NERSC) systems and other DOE supercomputing facilities. The goal of the computational model is to be able to analyze and predict atomization behavior as a function of fluid parameters, such as density, viscosity, and surface tension. The model will then be used to discover the key mechanisms driving the atomization process, with the goal of optimizing for higher paint flow rates in order to accelerate the assembly line, reduce energy consumption, increase process quality, and reduce defects.

The first major project milestone in this project was developing a 2D model of the paint atomization process. This milestone produced the insight to tackle 3D, which is now a workhorse code that the researchers are starting to use to accurately model a variety of parameters to fine-tune the material properties and optimize efficiency. Following the success of the first year of the project, HPC4Mfg extended funding for the collaboration for an additional year.

“In our in-house development process we test these paints over a wide range of spray conditions, but there are so many variables at play that it is really difficult to extract real fundamental understanding about what is happening in the spray process itself to drive that behavior,” says Rock. “This is where the computational model that Jamie and Robert are developing will be invaluable.”

Using computer simulation, researchers can easily experiment with changing multiple factors, such as the viscosity of the paint, its density, its surface tension, and the shape of the rotary bell, says Saye. “These are the experiments that will help us decipher the key mechanisms of how paint atomizes.”

"This project represents a wonderful example of the pipeline from basic core research through to a highly practical application with the potential to bring enormous economic savings,” says Sethian. “The mathematics and algorithms at work in this project resulted from a multi-year project to build high-order methods to couple fluid mechanics, interface propagation, and multi-phase flow for use across many complex physics applications; customizing and tailoring these ideas to PPG goals and applications is another demonstration of how powerful applied mathematics can be."

NERSC is a U.S. Department of Energy (DOE) Office of Science user facility.