The U.S. Department of Energy (DOE) continues to invest in the development of quantum computing across a number of projects and initiatives nationwide. In late August, the DOE announced two new funding awards that will bring significant support to Berkeley Lab research efforts in this area.

Berkeley Lab is among 30 recipients of $60.7 million in funding from DOE’s Advanced Scientific Computing Research office to advance the development of quantum computing and networking, from algorithms, programming languages, compilers, and debugging approaches to wide-area quantum networks that leverage existing fiber optic connections. 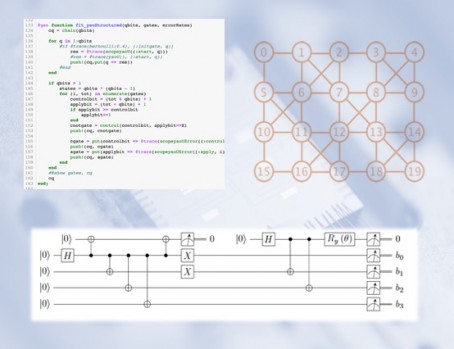 The new AIDE-QC project being led by Berkeley Lab will focus on developing and delivering open-source computing, programming, and simulation environments that support the large diversity of quantum computing research at DOE.

Berkeley Lab is leading one project, “Advancing Integrated Development Environments for Quantum Computing through Fundamental Research” (AIDE-QC), which will receive $17.5 million over a five-year period. Bert de Jong of the Computational Research Division is the principal investigator (PI) on the project, which brings together researchers from five DOE national laboratories (Berkeley, Oak Ridge, Los Alamos, Argonne, and Sandia) and the University of Chicago to address critical aspects of computer science research that accelerate the integration of near-term intermediate-scale quantum devices for scientific exploration.

Berkeley Lab is also a co-PI on the second project, “Fundamental Algorithmic Research for Quantum Computing,” which will receive $18.5 million over a five-year period. Led by PI Ojas Parekh of Sandia National Laboratories, this project will build on previous and ongoing work via the ASCR QAT/QCAT programs to develop novel quantum, classical, and hybrid algorithms to advance basic capabilities in quantum simulation, optimization, and machine learning; and provide rigorous resource scaling estimates for fundamental quantum algorithmic primitives.

“We are on the threshold of a new era in quantum information science and quantum computing and networking, with potentially great promise for science and society,” said Under Secretary of Science Paul Dabbar in a news release announcing the funding awards. “These projects will help ensure U.S. leadership in these important new areas of science and technology.”