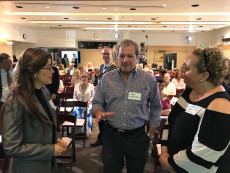 Dani Ushizima (left) and Tamar Vered of the lab's Visa and Immigration Services office speak with Rep. DeSaulnier at the Sept. 21 East Bay cancer summit. Vered spoke on a panel of cancer survivors.

Dani Ushizima, a staff scientist in Lawrence Berkeley National Laboratory’s Computational Research Division (CRD) who has adapted algorithms used in materials research to scan for cervical cancer, described her research in a panel discussion at the Sept. 21 East Bay Biden Cancer Community Summit. A common thread in each speaker's presentation was the importance of federally funded research in developing new methods to prevent and treat cancer.

The meeting was sponsored by East Bay Congressman Mark DeSaulnier, himself a cancer survivor, in conjunction with a Cancer Community Summit hosted by former Vice President Joe Biden in Washington, D.C., through his Biden Cancer Initiative.

Ushizima, a researcher in the Center for Advanced Mathematics for Energy Research Applications (CAMERA) and CRD’s Data Analytics & Visualization Group, was joined on the panel by cancer specialists, scientists and representatives of biotech firms.

Algorithms developed to analyze nanomaterials are also being used by her team to quickly screen Pap smear samples for cells that appear to be cancerous, Ushizima said. Before joining Berkeley Lab, Ushizima spent seven years working on leukemia diagnosis, specializing in chronic lymphocytic leukemia, the same kind of cancer DeSaulnier was diagnosed with in 2015.

"Through partnerships with UC Berkeley, UCSF and universities worldwide, my team and I have been translating lessons learned in materials science into tools that can accelerate cell analysis, and vice-versa. We leverage DOE investments to go beyond," Ushizima told the audience at the John Muir Medical Center in Concord. "Since 2012, we have inspected cervical cells, which come from samples collected during Pap tests."

Cervical cancer is the second leading cause of death worldwide for women aged 15-44, Ushizima noted. At the same time, it is nearly 100 percent curable if detected in early stages. In many cases, the results of Pap smears are examined manually by an expert using a microscope.

"My colleagues and I work with such experts to provide computational tools that can enable more efficient analysis. For example, what if we computer geeks can separate the wheat from the chaff and automatically sort out the valuable information?," she said "We can run searches for 'cell faces' to find similar cells in a database with an algorithm based on neural networks; this is somewhat similar to doing face detection using your social media app or finding best-matches on Pinterest."

Like the other panelists, Ushizima also has a personal connection to cancer: her youngest aunt has been battling stage four uterine cancer and passed away the day after the summit. Sitting next to Ushizima on the panel, Dr. Jennifer Michlitsch, a pediatric oncologist at UCSF Benioff Children's Hospital in Oakland, shared that two hours before the event she was at the bedside of a 13-year-old boy who died of childhood acute lymphoblastic leukemia. Although the number of children saved from the disease has increased tremendously, she said, it's the ones she can't save who inspire her to investigate new methods of prevention and treatment.

The panel discussion on research was followed by a panel in which cancer survivors described their experiences. Among the speakers was Tamar Vered, who works in Berkeley Lab's Visa and Immigration Services office.

A video of the cancer summit is available on DeSaulnier's Facebook page.