When Edith Mugehu returns to her work at the Zimbabwe Sugar Association Experiment Station after a two-week immersion in data analytics and biotechnology at Berkeley Lab, she hopes the knowledge she brings home will provide better lives for workers in her country’s expansive sugar cane industry.

She is working with Ijeoma Ezika, a lecturer in electronics engineering at the University of Nigeria, who is using her break from the classroom to explore the emerging area of machine learning.

The two TechWomen Emerging Leaders are spending five weeks in the United States as part of the U.S. Department of State’s TechWomen program. Sponsored by the State Department’s Bureau of Educational and Cultural Affairs, TechWomen is an international exchange program that brings emerging women leaders in science, technology, engineering and mathematics from Africa, Central Asia and the Middle East together with their professional counterparts in the U.S. and gives them access to networks, resources and industry contacts. The lab has hosted TechWomen participants since 2012.

During their two weeks at Berkeley Lab, Mugehu and Ezika are being sponsored by Daniela Ushizima, a staff scientist in the Computational Research Division and data scientist in the Center for Advanced Mathematics for Energy Research Applications (CAMERA). Mike MacNeil, an applied math post-doc in Ushizima’s group, is helping the two visiting researchers bridge their experience in computer science and biotechnology. Jackie Scoggins of the IT Division is co-sponsoring the visitors and helping them make connections in other parts of the lab, including the Advanced Light Source and the Joint BioEnergy Institute (JBEI), where Hector Garcia Martin showed them around.

“I’m still recovering from all the things I saw at JBEI,” said Mugehu, who had not been out of Africa before this trip. “They have ways of doing what I thought was impossible – I saw things I didn’t know existed.”

At her research station in Zimbabwe, Mugehu conducts research to predict and improve the yield of sugarcane so the 500 farmers she supports can choose the best varieties to plant and have a good estimate of how much income the crop will generate. She has a lot of data, but it is typically generated by hand by different people and much of it is either suspect or, at worst, fabricated.

Working with Ezika and MacNeil, she is hoping to come up with tools to make better sense of the data and have greater confidence in the analyses. As the technical person, Ezika is helping make decisions on the validity of the data, choosing parameters and writing the code.

“I’m interested in emerging technologies like machine learning and have been studying it on my own for two years,” said Ezika. “It’s a good research direction, but with about 400 students in my classes and after-school projects I just don’t have enough time to do as much research as I need to.” 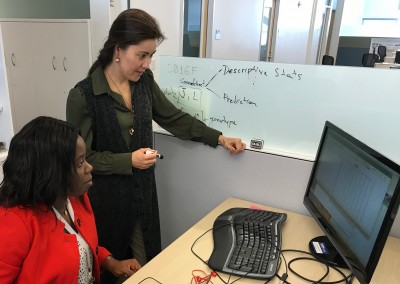 Although she is now a professor at one of Nigeria’s largest and most prestigious universities, Ezika said she actually stumbled into her career. Her family urged her to study medicine, but her exam results from high school showed she excelled in math and physics. She decided to study engineering, and since IT was a hot topic in 1999, she went into electronics engineering and “I’m really happy I did.”

For Mugehu, her classroom is in the sugar cane fields and her students are farmers who are not used to introducing new technologies. She helps breed new plants and runs a plant clinic to help them determine if their plants are afflicted by insects or disease. Her work is critical in a nation where about one-third of the population works in a job tied to the sugar cane crop. As the farmers improve their economic lot, there will be more money for further research.

She created the research station’s first microbiology lab two years ago but knew since she was a child that she wanted to work in biology. As a youngster, her mother was always complaining about the bugs that Mugehu would bring home, especially the caterpillars she would hide under her bed.

Back in Zimbabwe, one of her research efforts was to plant about 5 acres of sugar cane and then seek ways to make the plants flower more quickly. At JBEI, she saw a small apparatus that could accomplish the same goal. “I know that alone I’d never be able to do this,” she said. “I’ve seen so many things I didn’t know could be done and how you could modify equipment to do other tasks.” 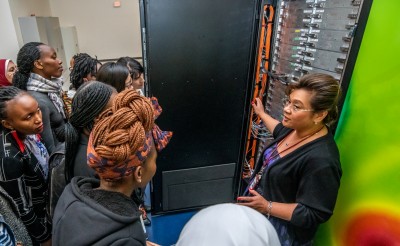 In addition to the tours, Mugehu said she's been surprised by how open people are about their work and generous in sharing their knowledge. Back home, researchers carefully guard their work, fearing someone may try to take it as their own, she said.

Ezika especially enjoyed the tours of various tech companies, stopping to take photos at LinkedIn and learning about Autodesk's work in the maker space, such as 3D printing. "I'm having lots of 'Amazing! Wow!' moments," she said.

After wrapping up their stint at Berkeley Lab, the TechWomen will head to Washington, D.C. for meetings, a banquet, and sightseeing. The Computing Sciences team also plans to submit the work as a research poster at the twelfth annual Biology and Mathematics in the Bay Area (BaMBA) meeting to be held Nov. 2 at Stanford University.

Ushizima is also considering launching a research project with the group to perform analytics for Agtech, an incubator focused on agriculture, in areas such as prospecting metrologies and applying machine learning to characterize different species of sugarcane for biofuel production. The TechWomen 2018 program could lead to another collaboration as Hanna Breunig of the Energy Analysis and Environmental Impacts Division, who mentored TechWomen Emerging Leader Irina Mun from Kazakhstan, learned about computer vision projects within CAMERA and they are discussing dairy farm identification algorithms for surveying agricultural areas.

"The year of 2018 was very special; the ladies are smart and driven to improve the common good," said Ushizima, who has hosted TechWomen in years past and participated in a reciprocal visit to Africa."I truly believe they will be taking what they learned forward into their communities for social good!"

Other TechWomen who met with Berkeley Lab mentors are Sharofat Jonmamadova, assistant to Manager of Academic Affairs at the University of Central Asia, Tajikistan; Nothando Ndlovu, physics tutor at the National University of Science and Technology in Zimbabwe; Safiya Aliyu, general manager of the Sosai Renewable Energies Company in Nigeria; Arailym Nurpeissova, a researcher and acting head of the Laboratory of Advanced Materials and Systems for Energy Storage at National Laboratory Astana at Nazarbayev University in Kazakhstan; and Irina Mun, founder of IE Hydro Lab in Kazakhstan.