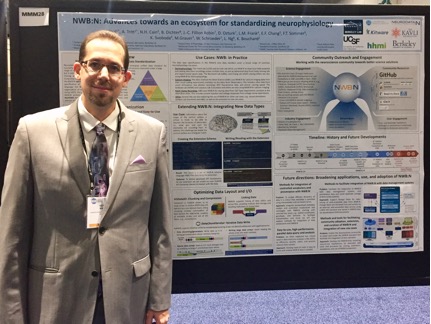 Oliver Ruebel presented a poster describing NWB:N 2.0 at the 2018 Society for Neuroscience meeting in November in San Diego, CA.

Researchers from the Lawrence Berkeley National Laboratory (Berkeley Lab) and the Allen Institute for Brain Science will receive $2 million from the National Institutes of Health (NIH) to develop a next-generation data format and software ecosystem for the Neurodata Without Borders: Neurophysiology (NWB:N) project.

NWB:N is a consortium of researchers and foundations that are interested in breaking down obstacles to data use and sharing in neuroscience. The group ultimately aims to standardize neurophysiology data on an international scale to ensure the success of brain research worldwide and accelerate the pace of scientific discovery.

With funding from the Kavli Foundation, Berkeley Lab scientists Oliver Ruebel, Andrew Tritt and Kristofer Bouchard led the development of the beta version of NWB:N 2.0, and will continue to advance the development of NWB:N as part of the NIH BRAIN Initiative. This work has been in close collaboration with UC San Francisco’s Loren Frank and Eddie Chang, Lydia Ng and others from the Allen Institute for Brain Science, the NWB:N Executive Board members and the broader NWB:N community.

As NWB:N 2.0 moves toward a full release at the end of this year, the team presented a poster of its work at the 2018 Society for Neuroscience meeting in San Diego, CA on November 6. With the new NIH funding, Ruebel and his colleagues will develop and maintain an accessible and sustainable software ecosystem for NWB:N. They will also design methods for integrating standard vocabularies and data provenance with NWB:N and develop standards for integration of NWB:N with data management systems and tools for community extensions and adoption.

“The lack of standards for neurophysiology data and related metadata is the single greatest impediment to fully extracting return-on-investment from neurophysiology experiments, impeding interchange and reuse of data and reproduction of derived conclusions,” said Bouchard, a research scientist in Berkeley Lab’s Biological Systems and Engineering Division. “The high-value datasets collected as part of the BRAIN initiative should be made widely available to the research community. Unfortunately, the output of neurophysiology research is currently almost exclusively research papers, with the original data and analysis tools rarely available.”

Berkeley Lab’s leadership in the NWB:N development would have not been possible without the Laboratory Directed Research and Development (LDRD) project  BRAINformat: A Data Standardization Framework for Neuroscience Data, Reubel emphasized.

“BRAINformat allowed us to engage with the neuroscience community and present our concepts and really was the starting point for our engagement with NWB:N,” said Reubel, a research scientist in Berkeley Lab’s Computational Research Division (CRD) and principal investigator on the NIH project.

The team subsequently began working on a 2.0 version of NWB:N and released a first beta version of NWB:N 2.0 last year so that users could offer input before the version’s officially release this year. Berkeley Lab also hosted a user engagement hackathon earlier this year, bringing together users to help them adopt NWB:N.

“We used modern software engineering principles to develop NWB:N 2.0. We incorporated a new modular software architecture and application programming interfaces that allow users to efficiently interact with the NWB:N data format, files and specifications,” said Tritt, a computer systems engineer in CRD and principle software architect on the NIH project.

“Despite these innovations, substantial software development remains to fully deliver on NWB:N’s promise of standardizing neurophysiology data on an international scale, and we are excited to tackle several key challenges as part of our work with the NIH BRAIN Initiative, ” said Ruebel.

For more information about Berkeley Lab’s Contributions to Neurodata Without Borders: