Derek Jones and Sally Ellingson of the University of Kentucky spent the summer in CRD working on a model that uses machine learning to assess how drugs bind with proteins. Photo by Marilyn Chung.

As the first person in her family to go to college, Sally Ellingson wasn’t aware that majoring in math could turn into a lucrative career. So she disregarded her gift for abstract equations and studied digital art instead.

But it was in her digital art classes where she discovered a new passion: computer programming.

After her first Java class, she was hooked. “I didn’t know much about computers before studying digital art, and the more I learned, the more I wanted to know,” she said.

Today, Ellingson is an assistant research professor of computational biology at the University of Kentucky, Lexington, College of Medicine who actively mentors promising computer science students. She’s also found a new sense of community by volunteering to coordinate student outreach activities at conferences that value diversity such as the SC (Supercomputing) Conference Series.

This summer, thanks to a partnership fostered last year by a Sustainable Research Pathways workshop co-sponsored by Berkeley Lab and the nonprofit Sustainable Horizons Institute, she now holds an affiliate appointment with the Lab, which allows her to extend national laboratory research opportunities to undergraduate or graduate students who have an interest in computational science.

For the past three months, Ellingson and her research assistant Derek Jones, a University of Kentucky computer science doctoral student specializing in machine learning, partnered with Computational Chemistry, Materials & Climate Group Leader Wibe Albert de Jong to enhance a computational model that she and her students at the University of Kentucky have been working on throughout the year.

“We already have a 99 percent accurate machine-learning model that predicts whether or not a drug will bind to one particular protein that we studied at Berkeley Lab last year," Ellingson said. "This summer, we want to make a more general model that would allow accurate predictions on multiple proteins at once, with a particular interest in potential new cancer therapies with fewer side-effects.”

For this phase of developing their new drug-binding model, Ellingson and Jones focused on protein kinases. “Kinase inhibitors are the largest class of new cancer therapies, but it’s hard for researchers to target specific kinases, because their sequences are so similar to each other,” she said. “This leads to off-target interactions and can cause adverse drug reactions and harm patients.”

Their improved computational model also uses information about the chemical structure and properties of a drug or protein. Jones ran simulations on the Cori supercomputer at NERSC to test their model’s efficiency and accuracy in predicting the degree in which a drug would “dock” or bind to a protein

The ultimate goal is to develop a software platform that – through the click of a button – allows researchers anywhere to study new proteins and cancer drugs, and predict the efficacy as well as side effects of new combinations of drugs and proteins at more than 99 percent accuracy, in the safe confines of a computer simulation. Eventually, Ellingson would like to build a large library of drug reactions against all the proteins in the human body, and look at individual variation within a population.

Before he returns to the University of Kentucky this month, Jones will spend time with family and continue his research in machine learning before he starts the second year of his Ph.D. program in the fall.

And Ellingson will head straight to Dallas to attend the Supercomputing 2017 (SC17) conference planning meeting. She is chairing the SC17 Student Volunteers program, which gives undergraduate and graduate students an opportunity to participate in professional development workshops and connect with industry leaders. “Planning student programs that promote diversity at conferences like supercomputing is important to me because it gives me the sense of community that I missed being underrepresented in my field,” Ellingson explained. 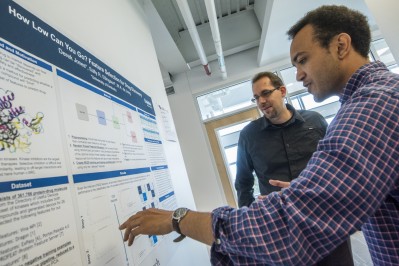 For Jones, working at the Lab has been an experience he’ll never forget. “It’s special that I had an opportunity to work at Berkeley Lab and gain the opportunity to work with scientists who are working on amazing things. I didn’t know that programs like this existed. I just never imagined that I would work somewhere like Berkeley Lab,” he said.

Ellingson hopes to be back at Berkeley Lab next year, teaming up with the next group of promising computational science students from the University of Kentucky. “As research faculty, it’s not required of me to mentor students. But I want to make sure that students I work with have the same great opportunities like research fellowships that I had as a graduate student. It’s important for me to give back and help people that might come from a less represented background,” she said.

The Lab’s Computing Sciences Area is planning the next Sustainable Research Pathways workshop, which will take place Dec. 4-5 this year

"One of our goals with this program is to connect with faculty and staff at universities that we don't typically interact with in the high-performance computing (HPC) community, like the University of Kentucky," said Computational Research Division Director David Brown. "In addition to the projects they are doing here, we're also hoping that the students get engaged with HPC or computational science and consider it as an area for graduate school or their career."