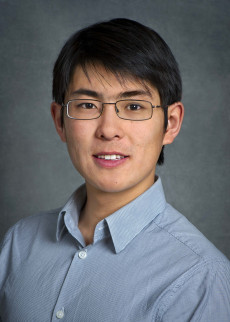 Lin Lin, a faculty scientist in Berkeley Lab’s Computational Research Division (CRD) and an assistant professor in UC Berkeley’s Mathematics Department, has received a 2017 Early Career Research Program award from the Department of Energy’s (DOE’s) Office of Science. Now in its eighth year, the award supports exceptional researchers during critical stages of their formative work by funding their research for five-years.

Lin will use his award to tackle one of the biggest challenges in mesoscale science: the coupling of quantum and classical physics in materials simulations. His work will be extremely useful for a number of scientific applications, such as understanding material defects, battery degradation and crack propagation.

Because the macroscopic properties of a material are influenced by its atomic structures, researchers theoretically could use models based on quantum mechanics to study how microscopic defects affect its larger structure. However, this is prohibitively expensive, because quantum mechanics models require an exceptional amount of computer time and resources to run.

Instead, researchers use multiscale models to lower the computational cost of such simulations. This currently entails applying a model based on classical physics to simulate objects of interest, and restricting the quantum mechanics models to small regions of the object that contain defects or other important microscopic features. Although this method works well enough for many science problems, the oversimplified treatment of atoms, especially those at the boundary of quantum and classical physics, can affect the accuracy of how mesoscale phenomena are depicted.

“In many important areas of research—such as, defect structure and evolution, coupled chemical reactions and pathways, transport properties, non-equilibrium structures and assembly of hierarchical functional materials—the properties and functionalities that are critical to macroscopic behavior start to manifest themselves at the mesoscale,” says Lin.

With his Early Career Award, Lin hopes to develop new numerical methods and other mathematical tools to accurately capture mesoscale phenomena in multiscale simulations. Ultimately, his goal is to have a systematic methodology for coupling quantum and classical physics, without introducing system dependent empirical parameters. These novel techniques would accelerate the study of multiphysics processes such as crack propagation and battery degradation, and be a boon to fields like electronic structure theory, geophysics, nonlinear optics, photonic crystals and quantum transport. This early career work will build on achievements that Lin and his colleagues realized with Laboratory Directed Research and Development funding from Berkeley Lab.

Lin came to Berkeley Lab as a Luis W. Alvarez Fellow in Computing Sciences shortly after completing his Ph.D. in applied mathematics at Princeton University in 2011. Since then, he has published more than 40 papers in peer-reviewed applied mathematics, computer science, computational physics, material science and chemistry journals.

Early in his Berkeley Lab career, Lin distinguished himself by serving as co-principle investigator on two Department of Energy Scientific Discovery Through Advanced Computing partnership projects to develop new efficient algorithms for electronic structure calculations and ab initio molecular dynamics simulation to accelerate the analysis of materials for lithium-ion batteries, ions in solutions, surfaces and biological environments, as well as other energy applications.

In 2013, Lin was hired as a research scientist in the CRD’s Scalable Solvers Group, and in 2014 he joined the University of California, Berkeley’s Mathematics Department faculty as an assistant professor. Lin currently holds a joint appointment as a faculty scientist at Berkeley Lab's Mathematics Group.  Lin was awarded the Alfred P. Sloan fellowship in 2015, the (inaugural) SIAM CSE Early Career Prize and the NSF CAREER award in 2017.