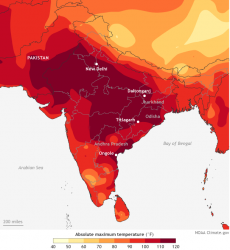 Hottest daytime high temperature during the week May 24-30, 2015. NOAA Climate.gov map by Fiona Martin, based on interpolated weather station data provided by the India Meterological Department.

Three researchers from Lawrence Berkeley National Laboratory (Berkeley Lab) are among the co-authors on the paper, which is included in “Explaining Extreme Events of 2015 from a Climate Perspective,” a special edition of the Bulletin of the American Meteorological Society (BAMS) released today (December 15) at the AGU meeting.

The paper, “The Deadly Combination of Heat and Humidity in India and Pakistan in Summer 2015,” examined observational and simulated temperature and heat indexes, concluding that the heat waves in the two countries “were exacerbated by anthropogenic climate change.” While these countries typically experience severe heat in the summer, the 2015 heat waves—which occurred in late May/early June in India and in late June/early July in Pakistan—have been linked to the deaths of nearly 2,500 people in India and 2,000 in Pakistan.

“I was deeply moved by television coverage of the human tragedy, particularly parents who lost young children,” said Michael Wehner, a climate researcher at Berkeley Lab and lead author on the paper who has studied extreme weather events and anthropogenic climate change extensively. This prompted him and collaborators from Berkeley Lab, the Indian Institute of Technology Delhi and UC Berkeley to investigate the cause of the 2015 heat waves and determine if the two separate meteorological events were somehow linked.

They used simulations from the Community Atmospheric Model version 5 (CAM5), the atmospheric component of the National Center for Atmospheric Research’s Community Earth System Model, performed by Berkeley Lab for the C20C+ Detection and Attribution Project. Current climate model-based products are not optimized for research on the attribution of the human influence on extreme weather in the context of long-term climate change; the C20C+ Detection and Attribution Project fills this gap by providing large ensembles of simulation data from climate models, running at relatively high spatial resolution. 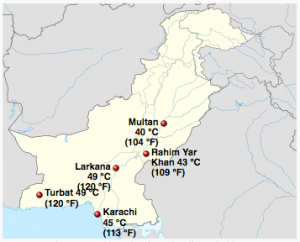 In June 2015, temperatures reached as high as 120°F in some parts of Pakistan. Source: Wikipedia

The experimental design described in the BAMS paper used “factual” simulations of the world and compared them to “counterfactual” simulations of the world that might have been had humans not changed the composition of the atmosphere by emitting large amounts of carbon dioxide, explained Dáithí Stone, a research scientist in Berkeley Lab’s Computational Research Division and second author on the BAMS paper.

“It is relatively common to run one or a few simulations of a climate model within a certain set of conditions, with each simulation differing just in the precise weather on the first day of the simulation; this difference in the first day propagates through time, providing different realizations of what the weather ‘could have been,’” Stone said. “The special thing about the simulations used here is that we ran a rather large number of them. This was important for studying a rare event; if it is rare, then you need a large amount of data in order to have it occurring frequently enough that you can understand it.”

The researchers examined both observational and simulated temperature alone as well as the heat index, a measure incorporating both temperature and humidity effects. From a quality-controlled weather station observational dataset, they found the potential for a very large, human-induced increase in the likelihood of the magnitudes of the two heat waves. They then examined the factual and counterfactual simulations to further investigate the presence of a human influence.

The research team also found that, despite being close in location and time, the two heat waves were “meteorologically independent.” Even so, Wehner emphasized, “the India/Pakistan paper confirms that the chances of deadly heat waves have been substantially increased by human-induced climate change, and these chances will certainly increase as the planet continues to warm.”

Data from Berkeley Lab’s simulations were also analyzed as part of another study included in the special edition of BAMS released at the AGU meeting. That study, “The Late Onset of the 2015 Wet Season in Nigeria,” which was led by the Nigerian Meteorological Agency, explores the role of greenhouse gas emissions in changing the chance of a late wet season, as occurred over Nigeria in 2015.

“The C20C+ D&A Project is continuing to build its collection of climate model data with the intention of supporting research like this around the world,” Stone said.

The C20C+ D&A portal is hosted and supported by Berkeley Lab’s National Energy Research Scientific Computing Center (NERSC), a DOE Office of Science User Facility, and the simulations for the two papers were run on NERSC’s Hopper supercomputer, while the data analysis was done on NERSC’s Edison and Cori systems. The simulations were conducted as part of a program dedicated to advancing our understanding of climate extremes and enhancing our ability to attribute and project changes in their risk because of anthropogenic climate change.  The research was supported by the DOE Office of Science and the National Science Foundation.