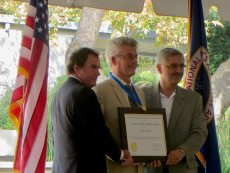 Julian Borrill, leader of the Computational Cosmology Center at Lawrence Berkeley National Laboratory, has been awarded the NASA Exceptional Public Achievement Medal for "conceiving and implementing the mission-critical high performance computing system for Planck data analysis." The medal was presented to Borrill in an Oct. 13 ceremony at NASA’s Jet Propulsion Laboratory in Pasadena, California.

For the past 15 years, Borrill has worked on using computing resources at the National Energy Research Scientific Computing Center to support the Planck satellite mission, a joint project between the European Space Agency and NASA. He has served as the US team’s computational systems architect for more than 10 years.

“This award is fitting recognition of Julian’s leadership role in supporting the data requirements of the Planck mission and establishing NERSC and Berkeley Lab as the computational hub of the U.S. Planck community,” said David Brown, director of the lab’s Computational Research Division (CRD), home to the Computational Cosmology Center (C3).

Launched in 2009, the Planck satellite was a space telescope that mapped the anisotropies of the cosmic microwave background (CMB) at microwave frequencies, with high sensitivity and angular resolution. The satellite was deactivated after gathering about a trillion samples, or about 10 terabytes of data. The data was transmitted to Earth, where it was archived at NERSC and made available to the Planck research community for analysis. However, the analysis of the data required the generation and reduction of 10,000 simulated realizations of the entire mission, equivalent to 100 petabytes of data.

In 2013, the Planck team released preliminary results based on the Planck observatory’s first 15 months of data. Using supercomputers at NERSC, Planck scientists created the most detailed and accurate maps yet of the relic radiation from the big bang. The maps revealed that the universe is about 100 million years older than we thought with more matter and less dark energy and a slower expansion rate.

Borrill’s efforts in support of Planck have included everything from directing the development and deployment of the massively parallel software needed for Planck’s most computationally challenging data simulation and analysis tasks, to drafting the memorandum of understanding between NASA and DOE that ensured that Planck would have access to NERSC throughout the mission.

“Although this is an individual award, it ultimately reflects the outstanding contributions of many people in CRD and NERSC over many years, as well as the long-standing support for Planck at NERSC from HEP and Berkeley Lab management,” Borrill said.

The award is not the first time NASA has recognized Berkeley Lab’s support of the Planck mission. Along with Borrill, current C3 members Reijo Keskitalo and Theodore Kisner and former members Christopher Cantalupo, Sara Ricciardi, Federico Stivoli and Radek Stompor, have also received a number of NASA Public Service and Group Achievement Awards for their work on the supercomputing infrastructure for Planck at NERSC.

In addition to leading the Computational Cosmology Center in CRD, Borrill is a Senior Research Physicist at the Space Sciences Laboratory at UC Berkeley.