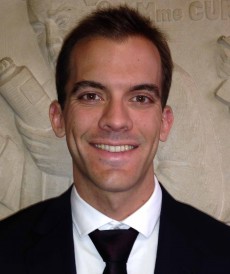 The first of eight post-doctoral researchers participating in the NERSC Exascale Science Applications Program (NESAP) is now working full time at NERSC and working with CRD's Center for Computational Sciences and Engineering (CCSE) on BoxLib.

Brian Friesen, a graduate student in computational astrophysics at the University of Oklahoma, joined the NESAP team May 18. He’s been assigned to CCSE, where he is focused on making improvements to BoxLib, an adaptive mesh refinement framework used in a variety of scientific codes.

“This position is unique in that it is a really nice marriage of computing science and physical science,” Friesen said. “I’m an astronomer by training, but I developed an affection for computing science and software development at a young age, and being able to do both is something I’ve been wanting for a long time.”

During his year-long stint as a NESAP post-doc, Friesen will work to optimize or re-design existing algorithms in BoxLib to take advantage of the massive concurrency of Cori, NERSC’s next-generation supercomputer that features a new manycore architecture.

“BoxLib powers a lot of different codes, a few astrophysical in nature, so it’s nice already knowing some of the physics and astrophysics that are driven by this code and to have some context for what the code is used for,” Friesen said.

Friesen is not new to NERSC—he started working with the center’s supercomputers in 2010 while in graduate school and used NERSC resources to do most of the calculations for his research on radiative transfer and spectroscopy in supernovae. In his new role at NERSC he will step out of the user role and get a firsthand look at how the center and its resources work.

“This is a very different side of computing for me,” he said. “I’ve always been in ‘happy user land,’ as far downstream from all these technical things as you could be. I’m looking forward to getting some experience with pre-production hardware from Intel, to see how NERSC interacts with vendors and field requests and to watch Cori come to fruition.”

Friesen is also excited by the opportunity to sharpen his software development skills.

“In grad school, your end goal is always science and results,” he said. “You can spend some time doing programming, but the end result is not code, it’s science. So to some degree it almost doesn’t matter if your code is fast or optimized. The bigger questions are ‘Does it work? Can we get the answer we want?’ Here at NERSC that is true as well, but I get to focus more on, for example, how do we design algorithms that work well when running on 72 threads on a compute node rather than six threads?”

Born and raised in Wichita, Kansas, Friesen obtained a Bachelors of Science degree from the Oklahoma Baptist University in Shawnee and a PhD in Physics from the University of Oklahoma. An aspiring triathlete, he spends much of his free time running, cycling and swimming.