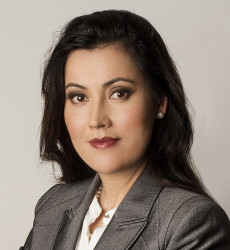 Daniela Ushizima, a computational scientist in the Computational Research Division (CRD) at Lawrence Berkeley National Laboratory, has received a 2015 Early Career Research Program award from the Department of Energy’s Office of Science. The award will fund research into developing new methods to help scientists extract more information from digital images produced by experiments studying materials such as ceramics and geological samples at the Department of Energy (DOE) facilities.

The work is important as facilities are deploying instruments that can produce digital images at much greater resolution and much more frequently than just a few years ago. Images are being generated so quickly that scientists are struggling to keep up and extract information contained in this data modality.

“This award is fitting recognition of Dani’s research contributions and also addresses a growing challenge within the scientific community – extracting hidden information from digital images produced by experiments,” said CRD Director David Brown. “This work will be another important step in helping researchers get the science out of their increasingly large datasets.”

Ushizima has worked on a number of projects to develop algorithms for speeding up the recognition of patterns in data in areas such as geologic and materials samples analysis, cervical cancer and neurological disorders. She serves as deputy lead for the Data Analytics and Visualization Group at Berkeley Lab and is a data scientist fellow at the Berkeley Institute for Data Science at the University of California, Berkeley. She is also a member of the Center for Applied Mathematics for Energy Research Applications (CAMERA) at Berkeley Lab.  She also shares her expertise in data science in workshops at the lab.

In describing her project that is funded under the Early Career Research Program, Ushizima wrote “The goal is to exploit a broad array of high resolution, multidimensional datasets to unveil relevant, but hidden information from digital images and related data. We will deliver a new modus operandi in the analysis of experiments acquired within LBNL and other DOE facilities, providing methodologies to guide and optimize experiments.”

The collaborative project will bring together:

“The result will be a set of data science models for scientific image analysis and new software infrastructure that provides tools that work both ‘on the factory floor’ as well as the workhorse techniques for processing experimental data at DOE supercomputer centers.” Ushizima wrote.

These advances will accelerate the analysis of image-based recordings, saving time between experiments, making efficient use of materials, and opening up the imaging facilities to more opportunities for more users.

“This is a great opportunity to explore and delve into image-based experiments,” Ushizima said of her award. “We are in a unique position where we have collaborations with the data sources, multidisciplinary teams to interpret the data and the computational methods to automate some of the inferences in this area, allowing us to solve challenges very specific to Berkeley Lab and other DOE facilities.”

In addition to her research, Ushizima also lectures at workshops and outreach activities to encourage young women to pursue careers in science and math. Read more about her efforts in this area.

Ushizima’s work will be funded by the Office of Advanced Scientific Computing Research in DOE’s Office of Science. DOE’s Early Career Research Program, now in its sixth year, supports the development of individual research programs of outstanding scientists early in their careers and stimulates research careers in the disciplines supported by the DOE Office of Science.