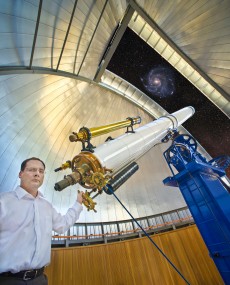 Peter Nugent has been appointed Deputy for Scientific Engagement in Berkeley Lab’s Computational Research Division (CRD). In his new role, Nugent will work with CRD and Computing Sciences leadership to develop and implement a strategy for engaging with other Berkeley Lab scientific divisions in need of computational solutions for data-intensive science projects. He will also act as a facilitator for these inter-divisional collaborations.

“Peter’s role as the Division Deputy for Scientific Engagement will leverage the leading role he has played over the last two decades in helping transform cosmology and astrophysics by taking advantage of the latest high performance computing resources to maximize the science from these data intensive fields,” says CRD Director David Brown.

As the former lead of the National Energy Research Scientific Computing Center’s (NERSC’s) Analytics Group, Nugent also brings a deep understanding of the roles that NERSC and CRD play in the emerging field of data-intensive science. As Deputy for Scientific Engagement, Nugent will be engaging with government stakeholders, including Department of Energy (DOE) headquarters, and other national laboratories to develop the Scientific Data Facilities (SDF) concept.

With advancements in cost-effective detector and imaging technologies, scientists are collecting more data than ever before. This information has the potential to transform our world. Humanity’s next revolutionary renewable energy source may be buried in the petabytes of information (quadrillion bytes) currently stored at public genome repositories. However, this deluge of data can also be debilitating as researchers struggle to store, analyze and visualize it to find the useful “nuggets” that could lead to a scientific breakthroughs. Ideally, the SDF would leverage the expertise of renowned mathematicians and computer scientists in CRD, as well as supercomputing resources at NERSC and the Energy Sciences Network (ESnet) to help scientists work through these data-intensive science challenges.

Nugent began his career at Berkeley Lab as a member of the Supernova Cosmology Project, led by 2011 Nobel Laureate in Physics Saul Perlmutter. The project used NERSC supercomputers to perform thousands of supernova simulations, which ultimately helped astronomers make the first measurements that confirmed the Universe’s expansion is accelerating. Nugent subsequently co-founded the Computational Cosmology Center in CRD.

Although he will continue his research activities in cosmology and astrophysics, as well as maintain a role in NERSC’s Data and Analytics Services Group, Nugent will step down as lead of CRD’s Computational Cosmology Center (C3). He will continue as acting lead of C3 until a replacement is named.