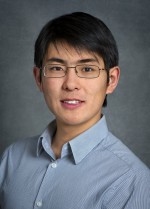 Lin Lin, a member of the Computational Research Division’s Scientific Computing Group since 2011, has been appointed as an assistant professor in the Department of Mathematics at the University of California, Berkeley. Lin, whose UC appointment was effective July 1, 2014, will also be a faculty scientist at Berkeley Lab.

Lin joined Berkeley Lab as a Luis W. Alvarez Postdoctoral Fellow in 2011 after earning his Ph.D. in applied and computational mathematics from Princeton University.

“The Alvarez fellowship provided me the freedom to fully focus on my research interest, and allowed me to explore various mathematical aspects of computational quantum chemistry and materials science,” Lin said. “It also provided me with various types of resources in the lab, which together with the proximity to UC Berkeley campus, is an opportunity available only at LBNL. I think being an Alvarez fellow was a very valuable experience in my career.”

After completing his fellowship in 2013, he was appointed a research scientist at the lab. His current research focuses on applied and computational mathematics, computational quantum chemistry and materials science.

Didem Unat, who was a Luis W. Alvarez Postdoctoral Fellow in the Computational Research Division’s Future Technologies Group, has been appointed as a professor in the Computer Science and Engineering Department at Koç University in Istanbul, Turkey. She begins her new position in September.

"Being a Luis Alvarez Fellow and being part of the Combustion Co-design Center allowed me to build research, communication and organizational skills,” Unat said. “I appreciate everybody whom I interacted last two years at LBL. They greatly helped me build my career and prepare me for my new position.”

Unat joined Berkeley Lab in 2012 as an Alvarez Fellow. At the lab, Unat developed the ExaSAT performance modeling framework together with Cy Chan and John Shalf for exascale co-design studies. She is currently working on the TiDA programming model, a programming abstraction for data locality. She was a co-organizer of the Workshop on Programming Abstractions for Data Locality (PADAL) held April 28-29, 2014, in Lugano, Switzerland.

Her research interest lies primarily in the area of high performance computing, parallel programming models, compiler analysis and performance modeling. She added that she is looking forward to teaching and conducting further research in programming model and compiler design at Koç University. Unat recently received an Early Adopter grant of the NSF/IEEE-TCPP Curriculum Initiative on Parallel and Distributed Computing.

Unat earned her Ph.D. at the University of California-San Diego. In her thesis, she developed the Mint programming model and its source-to-source compiler to facilitate GPGPU programming. A native of Niksar, Turkey, Unat fell into computer science as an undergraduate at Bogazici University in Istanbul, where she earned a B.S in computer engineering.