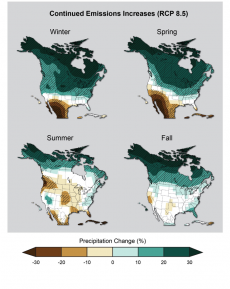 Projected change in seasonal precipitation for 2071-2099 (compared to 1970-1999) under an emissions scenario that assumes continued increases in emissions.

By the end of this century climate change will result in more frequent and more extreme heat, more drought, and fewer extremes in cold weather in the United States. Average high temperatures could climb as much as 10 or more degrees Fahrenheit in some parts of the country. These are some of the projections made by Lawrence Berkeley National Laboratory (Berkeley Lab) climate scientist Michael Wehner and his co-authors on the National Climate Assessment (NCA).

“Today’s rare weather events will become commonplace,” said Wehner, a climate scientist in Berkeley Lab’s Computational Research Division and an expert in using climate models run on supercomputers to study extreme weather events. “Climate change is real and is likely to get worse. How much worse depends on our actions now.”

Wehner is a lead author of several sections of the NCA, released today by the White House and available here. The report is meant to help inform Americans’ choices and decisions about investments, where to build and where to live, how to create safer communities and secure their own and their children’s future. “All Americans who are concerned about climate change should read this report or visit the National Assessment website,” said Wehner, who was also a lead author on the Fifth Assessment Report of the U.N.’s Intergovernmental Panel on Climate Change (IPCC), released last year.

Wehner and his co-authors of Chapter 2 of the NCA, which looked at the physical basis for our understanding of climate change, considered seven different future scenarios (including four new ones), ranging from the “do nothing” option to a geoengineering option, which would require an as-yet uninvented technology to take CO2 out of the atmosphere on a global scale, to achieve net negative emissions of greenhouse gases by 2050.

The best case (left) and worst case (right) scenarios considered in the National Climate Assessment both show temperature increases by the end of the century. (Click on image for larger image.)

Precipitation patterns will also change. There will be more winter and spring precipitation in the northern U.S. and less winter and spring precipitation in the southwest U.S. Moreover there will be severe agricultural drought conditions across most of the country by 2070 and much longer dry seasons in the southern part of the country. The climate models project decreased soil moisture in much of the U.S. in both summer and winter.

Wehner, who was also a lead author on the second National Climate Assessment report published in 2009, said one major improvement in this third NCA is increased confidence in the projections. “We have an even more thorough understanding of the human changes to the climate enabled in part by better computer models and their more complete representation of the climate system,” he said.