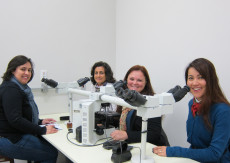 In the 1950s, the Papanicolaou (Pap) smear test—where a sample of cervical cells is examined under a microscope to detect cellular abnormalities—was introduced as a standard in cervical cancer screening. Since then, cervical cancer deaths in the United States have declined by 70 percent.

But the task of identifying abnormal cells isn’t exactly easy. Because much of the analysis relies on people manually examining slides, there are sample variabilities and disagreements among observers that can lead to false negatives. Experts suspect that automated slide analysis could reduce the cost, time and false negative rate, but an effective automation of the conventional Pap smear screening process has yet to be achieved. Earlier this year, several researchers issued a challenge in conjunction with the IEEE International Symposium on Biomedical Imaging (ISBI 2014) in Beijing, China for tools to extract the boundaries of individual cytoplasm and nucleus from overlapping cervical cell images.

The winning method, developed by Daniela Ushizima of the Lawrence Berkeley National Laboratory (Berkeley Lab), Andrea Bianchi and Claudia Carneiro of the Federal University of Ouro Preto (UFOP) in Brazil, included pattern recognition algorithms developed by the Department of Energy’s Center for Applied Mathematics for Energy Research Applications (CAMERA) to characterize new materials. Their method, which was judged to be the fastest and most accurate, will be highlighted in Washington D.C. on September 16, 2014, when Secretary of Energy Ernest Moniz hosts National Lab Day on Capitol Hill.

“Our tool is not going to cure cancer, we don’t have any software to sell to industry yet; what we do have is a starting point to automate the process of identifying where the cells are, to separate the cell’s nuclei and cytoplasm, and soon we will rank the cells according to their appearance.,” says Ushizima, who is also a member of CAMERA. “The win is especially exciting because it tells us that we are on the right track.”

A typical Pap smear contains anywhere from 50,000 to 300,000 cells, and in some cases a single abnormal cell might be lurking amongst them. Different cellular shapes, overlapping cells, poor contrast of the cytoplasm, and the presence of blood, inflammatory cells and mucus, can further complicate the analysis and lead to false negatives.

“We do not propose to take the cytologists out of the loop, but augment their inspection capability since that person’s work is invaluable for the final diagnosis. We think that the computer can increase the amount of samples a cytologist can handle per day, helping to improve the quality of testing, the accuracy of results and decreasing the time waiting for results,” says Bianchi, who was formerly a Berkeley Lab Postdoc working with Ushizima on segmentation techniques. “This tool can examine a huge amount of slides, day and night, and serve as a pre-screening for the pathologist.”

“Our work is the result of two years of collaboration with physicists and cytologists in Brazil, testing algorithms with broad application in pattern recognition,” says Ushizima. “My former postdoc at Berkeley Lab, who was paid by the Brazilian government to learn segmentation techniques, is now applying what she learned to Pap smear digital images in collaboration with the Brazilian public health system, focused on the underserved community of women.”