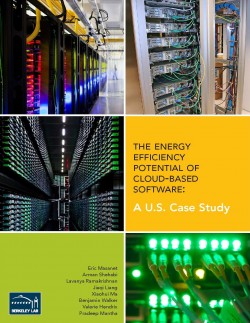 BERKELEY, Calif.—A six-month study led by Lawrence Berkeley National Laboratory (Berkeley Lab) with funding from Google has found that moving common software applications used by 86 million U.S. workers to the cloud could save enough electricity annually to power Los Angeles  for a year. The study, conducted with Northwestern University, is summarized in a report issued today (Tuesday, June 11, 2013).

The report looks at three common business applications — email, customer relationship management software, or CRM, and bundled productivity software (spreadsheets, file sharing, word processing, etc.). Moving these software applications from local computer systems to centralized cloud services could cut information technology energy consumption by up to 87 percent — about 23 billion kilowatt-hours. This is roughly the amount of electricity used each year by all the homes, businesses and industry in Los Angeles.

A primary goal of the project was to develop a state-of-the-art model that both researchers and the general public could use to analyze the energy and carbon impacts of cloud computing. This is the first time such a model is available to the public in open-access form and can be found at: http://cleermodel.lbl.gov

“We can’t fly by the seat of our pants when it comes to assessing sustainability. We need numbers – hard data -- to properly analyze how cloud computing compares to how computing is done now,” said Northwestern’s Eric Masanet, lead author of the report. “ Well-thought-out analysis is especially important with technology, which can have unforeseen effects. Our public model allows us to look forward and make informed decisions. What we found overall is that by hosting services on the cloud as opposed to locally, the savings are pretty robust.”

The study was conducted by scientists in Berkeley Lab’s Computational Research (CRD) and Environmental Energy Technologies (EETD) divisions and at Northwestern’s McCormick School of Engineering and Applied Science.

Lavanya Ramakrishnan of Berkeley Lab is the principal investigator for the project. Masanet, formerly of Berkeley Lab, is now an associate professor of mechanical engineering at Northwestern, where he focuses on sustainability issues.

Masanet provided a short overview of the study at the June 6 “How Green is the Internet” summit hosted by Google in Mountain View, Calif. The report can be found online at: http://crd.lbl.gov/assets/pubs_presos/ACS/cloud_efficiency_study.pdf 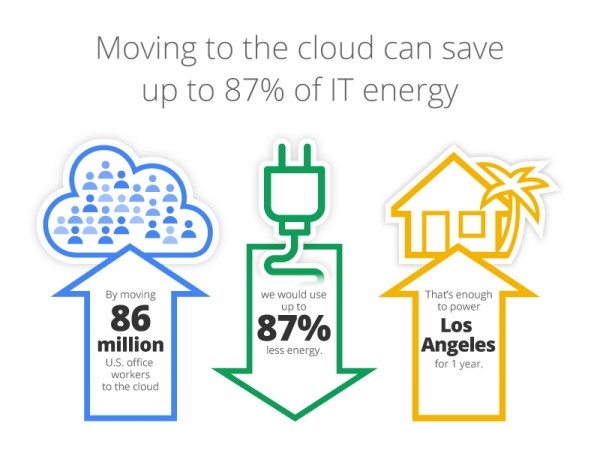 Google contacted Berkeley Lab to lead the study based on the laboratory’s extensive research into the energy efficiency of data centers and, more recently, an assessment of the suitability of cloud computing for helping Department of Energy scientists carry out their research. Although there has been much discussion about the environmental impacts of large-scale data centers, there has been much less research on the environmental benefits of providing common services from centralized cloud systems.

“We commend Berkeley Lab for completing such a thorough study of the broader implications of Internet computing,” said Michael Terrell, Senior Policy Council for Energy and Sustainability at Google. “We're especially excited that the model will be made available to other researchers and experts interested in doing their own analysis.”

In developing the public use model, the team used best available and credible data from a variety of sources, including their own past work and the research community. The data is based on typical industry practices. By providing an easy-to-use standardized model, the project aims to spur more discussion of the energy-related aspects of cloud computing, and the model was used to generate the findings in the report.

Ramakrishnan, a research scientist in the Computational Research Division, led the development of the public model. The division’s Valerie Hendrix and Pradeep Mantha helped develop the model. Arman Shehabi, a principal scientific engineering associate in the Environmental Energy Technologies Division, led Berkeley Lab’s role on the analysis component of the project, including developing the modeling framework and defining the different cloud computing scenarios applied to the model.

“The model, which will be available to a wide audience, allows you to evaluate energy use of various options in a significant way,” Ramakrishnan said. “By studying the present day and cloud scenarios, you can see the net energy and carbon-footprint benefits at a range of scales.” 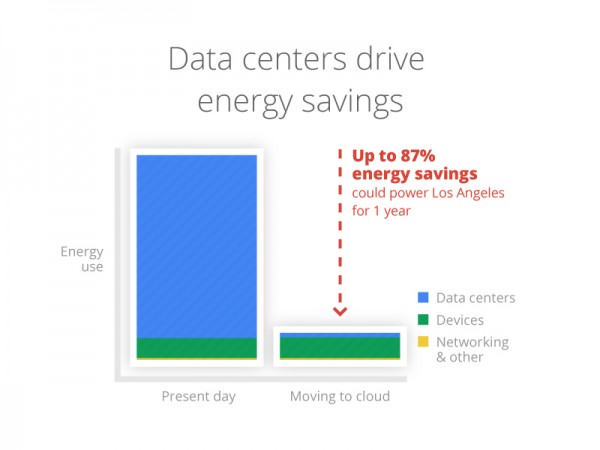 For example, the manager of a data center could compare current energy requirements with those if the center was moved to the cloud. Comparisons can also be done on a regional basis, such as moving all the data centers of a state’s universities from individual campuses to the cloud. Ramakrishnan said the model will be useful for individuals, program funding agencies and policymakers as they assess computing needs and energy demands.

“This powerful, public use model is really a foundational tool for the energy analysis community,” Shehabi said. “The analytical structure and various assumptions are fully transparent, so users can explore the model’s underlying analytics, compare different scenarios, poke at the data and discuss the results with the community.”

Although some commercial software firms and consulting companies have conducted some case studies, Ramakrishnan said that the team brought a more exhaustive model and an additional layer of independent academic rigor to the project, which includes making their methodology and findings publicly available. 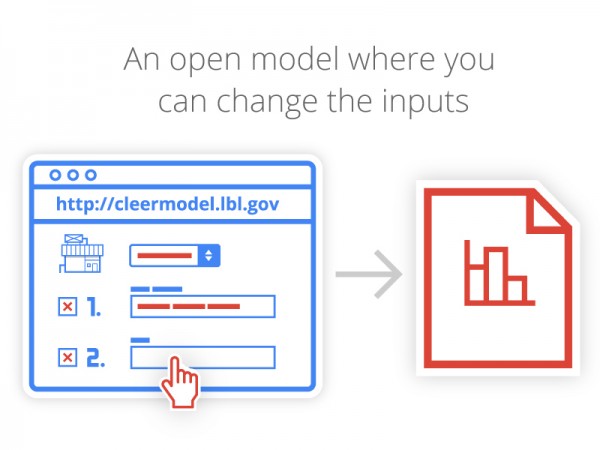 According to the researchers, Google wanted them as independent experts to come up with a model that captures the best available data, methods and science, and put it in the public domain. This is a key step toward a more open scientific process for better analyzing the thorny problem of what is the benefit of digital services.

“What we have is an interesting, national-level case study showing how the model adds value to the world,” Masanet said.

The model takes into account all of the various factors — data centers, transmission systems, client devices, transportation systems, etc. — necessary for comprehensive assessment of the environmental benefits or costs of shifting from local or physical resources to the cloud.

The study is an important step in assessing the environmental impacts of cloud computing in the U.S., and the team is currently preparing a similar report using data from European countries. That report is slated to be released later this year.

Lawrence Berkeley National Laboratory addresses the world’s most urgent scientific challenges by advancing sustainable energy, protecting human health, creating new materials, and revealing the origin and fate of the universe. Founded in 1931, Berkeley Lab’s scientific expertise has been recognized with 13 Nobel prizes. The University of California manages Berkeley Lab for the U.S. Department of Energy’s Office of Science. For more, visit http://www.lbl.gov.

DOE’s Office of Science is the single largest supporter of basic research in the physical sciences in the United States, and is working to address some of the most pressing challenges of our time. For more information, please visit the Office of Science website at science.energy.gov.

Founded in 1851, Northwestern University is one of the country’s leading private research and teaching universities with an enrollment of approximately 8,000 full-time undergraduate students and approximately 8,000 full-time graduate and professional students and approximately 2,000 part-time students on campuses in Evanston and Chicago, Illinois, and Doha, Qatar. Northwestern combines innovative teaching and pioneering research in a highly collaborative environment that transcends traditional academic boundaries. Northwestern provides students and faculty exceptional opportunities for intellectual, personal and professional growth in a setting enhanced by the richness of Chicago.