Visualizing Processes That Lead to “Cracks” in the Earth’s Cocoon 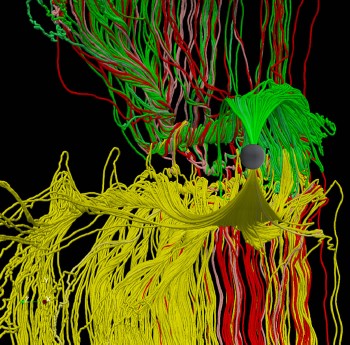 These images from a 3D global hybrid simulation of the Earth's magnetosphere show the formation of large-scale magnetic flux ropes, which are a direct consequence of magnetic reconnection. Interactions of these flux ropes lead to turbulent mixing of magnetic field and plasma. (Homa Karimabadi, University of California, San Diego; Burlen Loring, Lawrence Berkeley National Lab)

The Sun makes all life on Earth possible. Among its many life-sustaining functions, this star regulates our climate and provides an unlimited source of energy.  The Earth is also electromagnetically connected to the Sun, and this relationship exposes our planet to violent solar storms.  Unlike Earth, Sun’s atmosphere is not contained but blows across our solar system, a phenomenon called solar wind, which consists of charged particles and an embedded magnetic field.

“Observations and simulations show that magnetic reconnection is the predominant mechanism that fractures Earth’s protective magnetic shield … if it weren’t for the reconnection process, Earth’s magnetic field would be able to deflect nearly everything coming from the Sun,” says Homa Karimabadi, who leads the space physics group at the University of California, San Diego. “Given the central role of magnetic reconnection in exposing us to the effects of space weather, we are working on understanding this process in great detail.”

In the process of magnetic reconnection, magnetic fields lines in one direction suddenly break and reconnect with lines in the opposite direction, causing an explosive release of energy.  Magnetic reconnection occurs on the Sun and at the Earth’s magnetosphere. It is the mechanism behind the aurora borealis (or northern lights) as well as the explosive solar flares.

But how this phenomenon “cracks” the Earth’s magnetosphere is not well understood. Using supercomputers at the Oak Ridge National Laboratory (ORNL) and NASA’s Ames Research Center, Karimabadi and his colleagues ran simulations to investigate details of the reconnection process and the associated entry of solar wind plasma and fields into the magnetosphere.

According to Karimabadi, a single run of this model can generate over 200 terabytes of multidimensional data, and in one year the team ran this simulation about 15 times. To extract meaningful knowledge from these results, Karimabadi reached out to the Lawrence Berkeley National Laboratory’s (Berkeley Lab’s) Burlen Loring to develop customized visualization techniques for analyzing data.

“We’ve developed specialized codes that run on 200,000 plus cores, and have achieved some of the largest, most complex simulations in the world—standard visualization and analytics techniques were just not going to cut it,” says Karimabadi.

“This dataset is actually very large and complex, and there are not very many domain specific tools that can analyze it,” says Loring. “So I worked closely with the team to figure out what they needed, and then developed 20 to 30 algorithms for an existing analysis and visualization application, called ParaView, to meet their specific needs.”

Earth-Sized Fields to Subatomic Electrons, and Everything in Between

Getting the details of space weather right means capturing everything from the Earth’s magnetosphere (1.28 million kilometers across) right down to individual electrons flowing along magnetic lines. Achieving this in one simulation would require supercomputers more than 1,000 times faster than those available today. The team’s solution was to break up this problem into two parts: local and global simulations.

In the local simulations, electrons are treated as individual particles in regions of the magnetosphere where magnetic reconnection is known to occur. This allows researchers to home in on details of the most relevant interactions. The team then uses these local-scale details to improve the models of magnetic reconnection in global simulations, which encompass a region starting at about three Earth radii and ranging up to 30 to 200 radii. (One Earth radius is about 6,400 kilometers.) At this scale the electrons are no longer simulated as particles, rather they are treated as a fluid.

“Extracting knowledge from these massive 3D simulations is a daunting task,” says Karimabadi. “With Burlen’s visualization tools we were able to create movies that enabled us to detect features of interest and track their evolution in time.”

Karimabadi notes that with this new capability, the researchers were able to detect twisted bundles of magnetic field, or “flux ropes,” in simulation data and watch how they developed over time. “This enabled us to address longstanding questions regarding these magnetic flux ropes,” he adds.

The visualizations also revealed that magnetic reconnection is quite turbulent, producing vortices in the plasma that in turn create additional flux ropes. As observed by spacecraft, like NASA’s THEMIS mission, flux ropes can extend several times the radius of Earth.

According to Karimabadi, the simulations show that flux ropes start at electron scales and grow to very large scales. The flux rope interactions lead to turbulent mixing of magnetic field and plasma, which lets the solar wind enter different regions of Earth’s magnetosphere more effectively. Loring’s tools also enabled the team to color code magnetic field lines, which helped them track the level of mixing between the solar wind and Earth’s magnetosphere.

“The data analysis was so critical to our research that we made Burlen a co-author on our papers,” Karimabadi says. He notes that several papers have been submitted for review.

This story was adapted from stories written by ORNL and NASA.