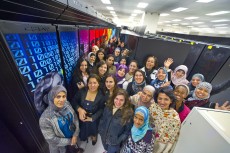 “One of the goals of this program is to expose these women to organizations like Berkeley Lab, which have a wide range of expertise—in computer hardware and software, computational science, applied mathematics, as well as networking and middleware—and specialize in applying these skills to solve scientific problems, as well as support a national research community,” says Taghrid Samak, a postdoctoral researcher in Berkeley Lab’s Computational Research Division (CRD) and TechWomen mentor.

Launched by Secretary of State Hillary Rodham Clinton in 2011, TechWomen is an international exchange that uses technology as a means to empower women and girls in the Middle East and North Africa. The exchange builds on Clinton’s vision of “smart power” embracing the full range of diplomatic tools, in this case technology, to bring people together for greater understanding and to empower women and girls worldwide.

“TechWomen gave us a valuable opportunity to learn and collaborate with our American companions. Although we come from different countries and cultures, as scientists we all share the same interests and concerns. For instance, issues like climate change and drought cross national boundaries affect us all,” says Faida Mansouri Joumade, a TechWoman from Tunisia. Joumade holds an engineering degree in agronomy and specializes in soil science and geometrics. During her U.S. visit, she was mentored by Samak and Deb Agarwal in Berkeley Lab’s CRD. 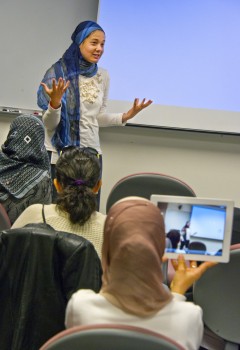 “I had never seen a synchrotron light source before my visit to Berkeley Lab,” says Zeina Hobaika, a TechWoman from Lebanon. An Assistant Professor in the Faculty of Sciences at Saint Joseph University of Beirut, Hobaika holds a PhD in Structure, Function and Proteins Engineering and specializes in anti-HIV drug design. Corie Ralston of Berkeley Lab’s Physical Biosciences Division mentored Hobaika during her stay in the U.S.

“Professionally, I learned a lot from Corie. It was interesting to see how she interacted with her team and we planned together some experiments that we will be applying to my research in anti-HIV therapies,” says Hobaika. “This was my first visit to the U.S. and I am leaving here with a new collaborator and friend, it was truly a once in a lifetime experience. I would like to thank all of the Berkeley Lab mentors for their generosity.”

“During my time here at Berkeley Lab I attended seminars on campus, got to give a lecture about my research and made some wonderful professional contacts,” says Essma Redouan-Salah, an Algerian high-energy physicist and Assistant Professor at M'sila University’s Faculty of Sciences. Marjorie Shapiro in the Berkeley Lab’s Physics Division hosted Salah during her U.S. visit.

This year, TechWomen brought a total of 41 women working in the technology sector from Algeria, Egypt, Jordan, Lebanon, Morocco, the Palestinian Territories, Tunisia and Yemen to the U.S. for a five-week mentoring program with their American counterparts. Later this year, U.S. mentors will travel to the Middle East and North Africa to conduct workshops for women in the technology sector and young girls who have expressed an interest in pursuing a tech-based career.

TechWomen is an initiative of the U.S. department of State’s Bureau of Educational and Cultural Affairs (ECA). TechWomen is managed by the Institute of International Education (IIE) and implemented in partnership with the Anita Borg Institute for Women in Technology.

For more information on TechWomen: http://www.techwomen.org/