Department of Energy's Investment Ensures AmeriFlux Data for All 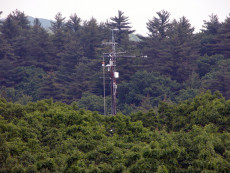 The flux tower rising above the forest canopy at the Harvard Forest LTER has been observing increasing CO2 uptake by the forest for nearly 2 decades. These typical New England forests with mixture of deciduous and coniferous species are important for keeping CO2 out of the atmosphere. (Photo courtesy of The Long Term Ecological Research Network)

Twenty years ago, researchers began installing state-of-the-art flux sensors in a variety of ecosystems across North, Central and South America—from tundra to tropical forests, and everything in between—to study how carbon dioxide (C02), water vapor and energy cycles through the atmosphere, plants and soil. Today, these sensors have been deployed at more than 120 locations across the Americas. Combined, they create a regional research network called AmeriFlux.

“Some of these sites have been monitoring ecosystem-level changes for decades, through periods of extreme droughts and rising global temperatures—this information could be used to improve the accuracy of climate models, or measure the impact of plant competition in an ecosystem,” says Margaret Torn, who co-heads Lawrence Berkeley National Laboratory’s Climate and Carbon Sciences Program.

Because the Department of Energy recognizes that these datasets could benefit a variety of scientific communities, beyond those interested in carbon flux, it is funding an effort to make AmeriFlux data accessible to a wide-range of researchers. The project will receive $5 million in funding, over three years.  As the project’s principal investigator, Torn will lead an effort to maximize the quality of data collected by each AmeriFlux site, as well as maintain and expand on the collaboration’s existing archive. She will be working closely with Deb Agarwal, who heads Berkeley Lab’s Advanced Computing for Science Department, to develop the software tools and computational infrastructure needed to achieve these goals.

“Over the years, the AmeriFlux network has grown organically—a scientist or research group would propose to set up a tower, then ask to join the network,” says Torn. “DOE has always supported sites working together to make the sum of the network greater than its individual parts. They worked with AmeriFlux sites to develop standards for collecting and recording flux field-data and even invested in a central archive.”

But now that DOE wants a broader scientific community to benefit from these datasets, there is more to do. “We need to make information in the AmeriFlux database searchable, and come up with new standards for collecting and reporting field-data so that a broader science community will be able to access, compare, and use it in their research,” adds Torn.

By teaming up with Agarwal, the AmeriFlux team will be able to leverage many of the data management and ecoinformatics tools that she cultivated for similar collaborations—monitoring California watersheds, soil carbon and global carbon fluxes—with a Microsoft Research grant.

“One of the benefits of working on these Microsoft Research projects is that we had the opportunity to work with researchers to understand what they needed and to enable them to access and use the data easily,” says Agarwal.

She notes that some of the tools that her team developed for curating, vetting and processing global flux network data may be applied to this project, and additional customized and innovative tools will need to be created to support the researchers. Agarwal and Torn also have a close working relationship with the European flux network, called ICOS (Integrated Carbon Observation Systems) and they note that AmeriFlux will benefit from ICOS lessons-learned and tools.

“Ultimately, this work will helps us predict the future—we will be able to understand how droughts and greenhouse gases affect our world, and develop more effective strategies for land–management,” says Torn.

According to Agarwal, the AmeriFlux Network Management will utilize resources at DOE’s National Energy Research Scientific Computing Center (NERSC) to store their data and process information for users as needed. The project will also be utilizing DOE’s Energy Sciences Network to transfer data between NERSC and researchers at participating national laboratories.