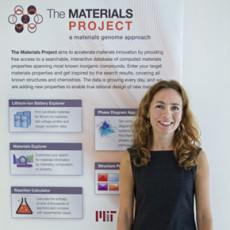 To reduce the United States’ reliance on foreign oil and lower consumer energy costs, the Department of Energy (DOE) is bringing together five national laboratories, five universities and four private firms to revolutionize next-generation battery performance. This collaboration—dubbed the Joint Center for Energy Storage Research (JCESR)—will receive $120 million over five years to establish a new Batteries and Energy Storage Hub led by Argonne National Laboratory (ANL) in Illinois. Lawrence Berkeley National Laboratory (Berkeley Lab) is a major contributor to this collaboration and will be leading the computational modeling effort.

“Until recently, the field of developing new materials for advanced batteries has primarily been based on intuition and guesswork. From the laboratory to commercial application, this approach can take about 15 to 18 years,” says Kristin Persson, a Berkeley Lab chemist who will lead JCESR’s computational modeling effort. “Our goal is to use computational modeling to reduce this time by an order of magnitude, which could accelerate energy savings and make industry more competitive.”

She notes that, JCESR will leverage the computational resources, tools and expertise at DOE’s National Energy Research Scientific Computing Center (NERSC) to predict the properties of electrolytes—liquid solutions that conduct ions between battery plates and aid in energy storage. When JCESR is up and running, collaborators will be able to combine their resource with the existing Materials Project to get a complete scope of battery components. Together these resources allow researchers to employ a systematic and predictive approach to battery design.

“The Materials Project’s success in assisting researchers predict the properties of new compounds helped us make a strong case for the Batteries and Energy Storage Hub,” says Persson. “We are extremely grateful for NERSC support because the Materials Project would not have come this far without it.”

A Pipeline for Materials Science Computing

“The systematic approach to materials design is an exciting step forward because it relies on a pipeline to submit jobs, automating many of the aspects of discovery,” says David Skinner, who heads NERSC’s Outreach, Software and Programming Group. “Rather than having individual users login to NERSC, run a few simulations and use the results to publish a paper, the JCESR collaborators may never touch the HPC systems directly.”

Instead, the results of tens of thousands of simulations are stored in a searchable database accessible from the web, Skinner notes, so they are available for scientists and engineers working on a variety of problems that involve related materials.

“This increases the impact of the NERSC computations by sharing them more broadly, but also requires flexible systems software to a run massive number of parallel jobs with a single command,” says Skinner. “Imagine a kind of ‘science bot’ that systematically runs a set of jobs on your behalf and stores the results in a database, keeping track of which have crashed, and how to best schedule the jobs across the high speed network.”

According to Persson, both the Materials Project and JCESR are also taking advantage of NERSC’s Science Gateways, which allow scientists to access data, perform computations and interact with NERSC resources using web interfaces. The idea is to make it easier for scientists to use computing resources at NERSC, while creating collaborative tools for sharing data with a bigger scientific community.

The Materials Project database is now publicly accessible via one of these gateways, and includes predictive tools like a materials explorer, a reaction calculator, a phase diagram application, a lithium battery explorer, a crystal toolkit and a structure predictor.

“Because the Materials Project workflow performs well at NERSC and we have such a good relationship with the facility’s staff, we’d really like to continue to compute there as we search for new materials,” says Persson.

In fact, when she was selected to head DOE’s Center for Functional Electronic Material Design (CFEMD)—a five-year, $11 million center to conduct large-scale data generation, data-mining, and benchmarking for new materials—Persson decided to set up a dedicated computing environment, called Mendel, at NERSC. Mendel is integrated into the NERSC environment to take advantage of the global filesystem, the scientific data archive, and the Science Gateway infrastructure, as well as the HPC expertise of the staff.

More information on the Materials Project and CFEMD: