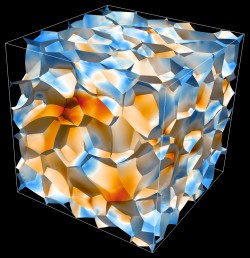 Image of fluid flow in a 3-D agitator that mixes many different fluid phases as computed by the VIIM technique.

James Sethian and Robert Saye, mathematicians who both hold joint appointments with the Lawrence Berkeley National Laboratory (Berkeley Lab) and the University of California (UC) Berkeley, have won the 2011 Cozzarelli Prize for the best scientific paper in the category of Engineering and Applied Sciences. Their winning paper, “The Voronoi Implicit Interface Method for computing multiphase physics,” introduces a robust, accurate and efficient numerical method for tracking large numbers of interacting and evolving regions (phases) whose motions are determined by complex interactions of geometry, physics, constraints and internal boundary conditions.

“This class of numerical methods presents a mathematically unified approach to complex interconnected moving interfaces, and opens the door to computing a host of challenging problems,” says Sethian, who heads the Mathematics Group of the Berkeley Lab’s Computational Research Division.

Problems that the VIIM can be applied to include dry foams, crystal grain growth, the mixing of multiple materials, and the formation of multicellular structures. These interfaces are the boundaries of individual regions/cells, which are referred to as phases. The physics, chemistry, and mechanics that drive the motion of these interfaces are often complex, and include topological challenges when interfaces are destroyed and created.

“We are currently applying the VIIM to computing drainage in industrial foams, multi-phase mixing, and the stability and evolution of biological cell clusters under fluid and geometric forces,” says Saye.

The Cozzarelli Prize is sponsored by the Proceedings of the National Academy of Science (PNAS) to acknowledge papers published during the year in PNAS demonstrate the highest scientific excellence and originality. The annual award was established in 2005 and named the Cozzarelli Prize in 2007 to honor late PNAS Editor-in-Chief Nicholas R. Cozzarelli. Six prizes are awarded in the six broadly defined classes under which the National Academy of Sciences is organized.

Sethian and Saye will receive their prize at the PNAS Editorial Board Meeting on April 29, 2012, in Washington, DC. Papers receiving the 2011 Cozzarelli Prize were chosen from the more than 3,800 research articles published in PNAS in 2011.

For more about the research of James Sethian visit the Website at: http://math.berkeley.edu/~sethian/