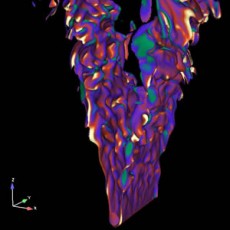 As humans emit more carbon into the atmosphere than the planet's natural processes are able to remove, the Earth's carbon cycle is increasingly out of balance. In an effort to restore the carbon balance, researchers in the Lawrence Berkeley National Laboratory's (Berkeley Lab) Computational Research Division (CRD) have developed computational methods to explore the viability of carbon-neutral technologies, like nano solar cells and near-zero emission combustion devices.

And now, the researchers will put those tools to work using allocations on two of the world's most powerful supercomputers at the Department of Energy's Leadership Computing Facilities. Together, the CRD researchers received more than 18 million supercomputing hours through the 2010 Innovative and Novel Computational Impact on Theory and Experiment (INCITE) program to conduct experiments and run simulations.

"Computation and supercomputing are critical to solving some of our greatest scientific challenges," says Steven Chu, U.S. Secretary of Energy. "This year's INCITE awards reflect enormous growth in demand for complex modeling and simulation capabilities, which are essential to improving our economic prosperity and global competitiveness."

"Some of the critical aspects of nano solar cell systems are still not well understood, we need to answer these questions to have a physical picture of how a nano cell works, to calculate the efficiency of a nano cell design and to pinpoint the bottleneck of a device in order to design better solar cells," says Wang. "Nano solar cells need efficiencies above 10 percent to have an impact in the energy market, but current designs made from inorganic systems have an efficiency range of one to three percent."

To calculate the energy potential of these nanostructures in technologies containing 10,000 or more atoms, Wang will use a tool developed by his group called the Linearly Scaling Three Dimensional Fragment (LS3DF) method. This approach uses less computer time, disk space and memory, than traditional methods. In 2008, the Association for Computing Machinery honored Wang's LS3DF with a special Gordon Bell Prize for algorithm innovation.

Another Berkeley Lab INCITE recipient is John Bell, head of CRD's Center for Computational Sciences and Engineering. Bell will receive eight million supercomputing hours in 2010 to gain a better understanding of lean premixed flames that will be key in the development of near-zero emissions combustion devices. His simulations will provide details that are not directly accessible by experiments because of the difficulties of making detailed measurements on a hostile combustion environment. The research could significantly contribute to projects sponsored by DOE's Office of Fossil Fuel Energy targeted towards development of near zero emissions coal power plants.

Bell notes that the ultimate goal is to design "clean coal" technologies, or coal burning combustion devices that will produce hydrogen and other fuels with dramatically reduced emissions. In the process, these devices will also capture carbon dioxide before it reaches the atmosphere. However, a key hurdle to developing these technologies is that current "clean coal" designs presuppose a fundamental understanding of combustion instabilities for ultralean premixed systems that do not yet exist.

"Our research has significant ramifications for theoretical studies, engineering design models, and even for the processing of experimental diagnostics," says Bell.

A total of 69 projects were selected to participate in the INCITE program in 2010 based on peer review and computational readiness evaluations of their potential to advance scientific discovery. These projects will receive supercomputing time at DOE's Leadership Computing Facilities at Argonne National Laboratory in Illinois and Oak Ridge National Laboratory in Tennessee.

In addition to Bell and Wang's work, a variety of Berkeley Lab researchers will also collaborate with other INCITE awardees to figure out how to run DOE's leadership supercomputers more efficiently, and other among other basic energy science questions. For a more information on the 2010 INCITE Awards, please visit: http://www.er.doe.gov/ascr/incite/