Keith Beattie at the South Pole.

During a time of the year when many people have turned their attention to activities at the North Pole, Keith Beattie of the Distributed Systems Department has been focused on the IceCube project at the South Pole (http://icecube.wisc.edu/). Beattie, a software engineer who has been working on testing the data acquisition software for IceCube, will wrap up his three-week stint at the Antarctica site on Dec. 21 — just in time to spend Christmas on the beach in Australia.

Here’s Beattie’s description of his adventure to date, filed from the South Pole:

“The trip down here is for the IceCube project. There are plenty of people at LBL would could fill you in on the details of the project but briefly, we are building a neutrino telescope which looks up through the Earth for neutrinos coming down from the North - using the Earth itself to filter out other charged particles. We are drilling holes down into the clear dark ice here where strings of Digital Optical Modules (DOMs, or “eyeballs”) will look for protons thrown off from chance collisions of neutrinos with the ice. The holes are 2.5 km deep, 60 DOMs per string (spaced out over the lowest 1 km) and eventually, 80 strings. It is a very large multi-year project. I'm working on the Data Acquisition software system which runs on a cluster of compute nodes here running trigger algorithms detecting events and filtering them from noise, then shipping north over a relatively limited satellite uplink. In the north further processing of the data will reconstruct the events to determine what was seen by the telescope.

“Getting to and being at the South Pole is quite an experience. After flying to Christchurch, NZ, I took an Air Force C-130s to McMurdo station (on the coast of Antarctica) and then another from McMurdo to the Pole. A 9.5 hour flight, then a 3.5 hour flight. 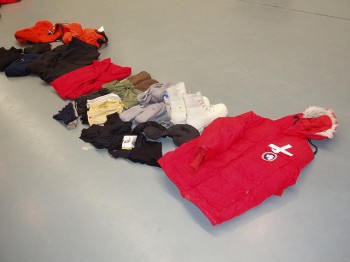 Before leaving Christchurch we all visit the CDC (Clothing Distribution Center) where they outfit you with your ECW (Extreme Cold Weather clothes).  I think that when you combine computer people with military people you could have entire conversations comprised entirely of acronyms.

“The flights down are amazing in seeing the terrain you fly over and then into. When we landed at the pole it was -30 degrees F with a wind chill of something like -60 F. The ECW is absolutely needed and quite sufficient. They issue different sets of clothing based on your job, and since I'm not spending much time outside I've got somewhat different clothes than the people building and operating the drill (which in itself is an amazing feat of engineering). Still, having to walk to and from my Jamesway (5 minute walk to where I sleep) or having to get up to visit the bathroom in the middle of the “night” requires suiting up (though you try to get away with less and less each time).

“Speaking of night, the sun never sets here in the summer — it just revolves around your head each day. That though hasn't been as disorienting to me as I thought. Even the cold you can get used to, to some extent. What is more challenging to adjust to is the altitude. The South Pole is at an elevation of 9,306 feet (because we are sitting atop close to 2 miles of ice) but due to the even thinner air at the poles, the effective elevation hovers around 10,000 feet based on the barometric pressure. This means you are sucking air for about 2-3 days when you arrive. Altitude sickness is something everyone needs to look out for. Taking it easy for the first few days is required for everyone.

“For me, at least, the most difficult thing to adjust to has been the low, low humidity. The air is so dry here you need to guzzle water nearly constantly to stay hydrated. The relative humidity is about 50 percent, but that is in cold, cold air. Having no meteorological background whatsoever, I've proposed to the met. people (who happen to sit nearby) a new humidity factor (akin to wind chill in describing what you experience) where you measure your relative humidity based on room temperature. By this measure we've got about 0.5 percent indoor relative humidity — which is what it feels like.

“So right now, I'm told, the air is about as warm and thick as it ever gets here: -0.9 F, Wind 5.3 knots (Windchill -13.1 F), Barometer 702.4 mb (9794 ft). There were people outside playing rugby earlier today. Crazy Kiwis (New Zealanders). Speaking of the people, they are great. I'm only here for three weeks, leaving here on the 21st (and then spending Christmas on the beach in Sydney!)  Even the winter-overs (people who work here over the winter months when you can't leave), though a “special breed,” are good to work with. There is a real sense of camaraderie here, though “ice time” is how you separate the hardened folk from short-timers like me. The food here also deserves mention, I wish we could get some of these cooks in our LBL cafeteria!”