Berkeley Lab's CRD Contributes to Breakthroughs of the Year Every year, Science magazine editors and staff sift through numerous scientific accomplishments and ultimately crown one “Breakthrough of the Year.” Of the top 10 finalists for 2012, Lawrence Berkeley National Laboratory (Berkeley Lab) computational researchers were major contributors to two accomplishments, including the winner: Discovery of the Higgs Boson.

Discovery of the Higgs Boson: Breakthrough of the Year

On July 4, 2012, researchers at the European Organization for Nuclear Research (CERN) announced that they had spotted a particle that could be the elusive Higgs boson—the last missing piece of the Standard Model of fundamental particles and forces. Physicists believe that the Higgs, hypothesized 40 years ago, could explain how all fundamental particles get their mass.

To produce the Higgs, CERN built the Large Hadron Collider (LHC)—a 27-kilometer-long particle accelerator beneath the Franco-Swiss border. To see the Higgs, researchers relied on two LHC detectors—ATLAS and CMS. And to sift out new physics from the torrent of ATLAS detector data, scientists depend on Athena—a software framework developed under the leadership of Paolo Calafiura, a staff scientist in the Berkeley Lab’s Software Systems Group.

According to Calafiura, ATLAS detectors record about 400 collision events per second and Athena allows thousands of globally dispersed researchers to collaborate result in real-time.

Two facilities located at Berkeley Lab also contribute critical resources to the ATLAS analysis process. NERSC is home to one of the biggest Tier-3 ATLAS data centers in the U.S., while ESnet transports all of this data between Tier-1 sites at the National Laboratories, and collaborators at universities, research facilitles across the country.

More about Berkeley Lab and Athena: http://www.lbl.gov/cs/Archive/news051710.html
Science Breakthrough of the Year: http://www.sciencemag.org/content/338/6114/1524.full 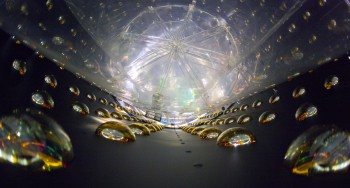 Born in the hearts of stars and other nuclear reactions, neutrinos pass mostly unhindered through everything from planets to people. Although they come in three basic “flavors”—electron, muon and tau—neutrinos and their corresponding antineutrinos can transform from one flavor to another while traveling near light-speed. How they do this has been a long-standing mystery.

In 2012, the Daya Bay Reactor Neutrino Experiment in China measured the last parameter describing how these elusive particles morph into one another. This finding opens the door for a new understanding of fundamental physics and may explain why there is far more ordinary matter than antimatter in the cosmos.

“Thanks to the computing expertise at Berkeley Lab, we were able to see antineutrinos with NuWa in the first filled detectors within 24 hours,” said Tull in an announcement shortly after the discovery was announced. “We were able to see an anti-neutrino deficit in the far hall within days. And finally, we have been able to extract a high-quality θ13 value within only 75 days of start of far-hall running.”

As a Tier-1 facility for the Daya Bay Experiment, NERSC is the only site where all of the raw, simulated and derived data are analyzed and archived in the US. From NERSC, ESnet carries Daya Bay data to Brookhaven National Laboratory (BNL), which serves as a Tier-2 US facility for the experiment. BNL is responsible for secondary data processing, as well as some archiving. The network also transports Daya Bay data to collaborators at universities, research institutions and national laboratories across the US.

To see all of the candidates for Science’s Breakthrough of the Year, see:
http://www.sciencemag.org/site/special/btoy2012/index.xhtml