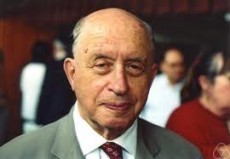 In November, the American Society of Mechanical Engineers presented Grigory Isaakovich Barenblatt of CRD’s Mathematics Group with the Timoshenko Medal “for seminal contributions to nearly every area of solid and fluid mechanics, including fracture mechanics, turbulence, stratified flows, flames, flow in porous media, and the theory and application of intermediate asymptotics.” The Timoshenko Medal was established in 1957 and is conferred in recognition of distinguished contributions to the field of applied mechanics. Instituted by the Applied Mechanics Division, it honors Stephen P. Timoshenko, world-renowned authority in the field, and it commemorates his contributions as author and teacher.

Barenblatt, a frequent collaborator with Alexandre Chorin of the Math Group, has authored a number of articles examining the effects of turbulence in areas ranging from aircraft design to the formation of hurricanes.

In 1999, Barenblatt he was named the first recipient of a new international prize in applied mathematics, the Maxwell Prize, established by the International Congress on Industrial and Applied Mathematics (ICIAM).