The starting point of our Application Performance Characterization project (Apex) is the assumption that each application or algorithm can be characterized by several major performance factors that are specific to the application and independent of the computer architecture. A synthetic benchmark then combines these factors together to simulate the application's behavior. Thus, the performance of the benchmark should be closely related to that of the corresponding application. Such a benchmark can be used as a realistic indicator of achievable application performance and enables the users to directly evaluate a new platform based on their own interests. At the same time, synthetic benchmarks are substantially easier to use than real applications. Real applications are often too complex to be run by simulators, thus prohibiting their use in the development of new architectures.

The single-processor performance of APEX-Map on a logarithmic scale in cycles/data-access. L stands for vector-length and represents spatial locality, a represent temporal locality with a=1 equal to minimal locality (pure random) and small values for high temporal localities. It demonstrates the range of achievable performance values and the influence of cache-hierarchy on performance. 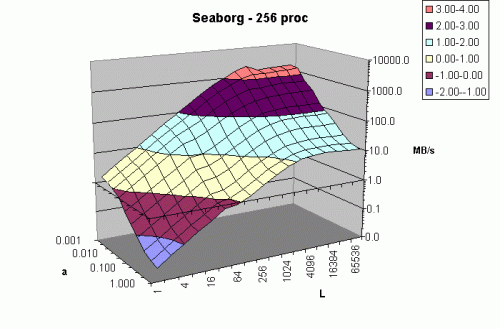 The dramatic influence of locality on performance can clearly be seen in this graph of APEX-Map running on 256 processors on a logarithmic scale in MB/s.

» Read about the newest release: Apex-Map 3.0