The difficulty in sampling many-dimensional probability densities on a computer is a major obstacle to progress in many fields of science, for example in economics and finance, weather forecasting, quantum field theory, and statistics. There are typically too many states to sample, most of which have very small probability, while the location of the important states is not known in advance.

The Mathematics Group at LBNL has developed a methodology, implicit sampling, which finds unbiased high-probability samples efficiently through a variationally enhanced process, which zeroes in on the high-probability regions of the sample space. 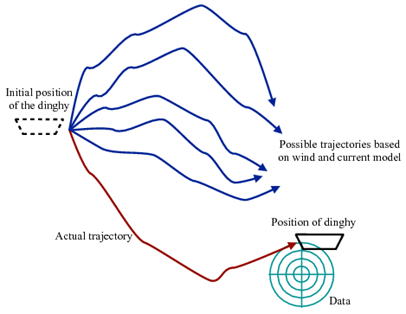 Example of how implicit sampling can accurately estimate the position of a dinghy (shown by the path in red) without having to trace improbable paths (shown in blue).

One major application of their methodology so far has been to the problem of data assimilation, where one is trying to make predictions on the basis of an uncertain model and a stream of noisy data (as one does, for example, in meteorology and in economic forecasting). As an example, suppose the coast guard is trying to locate a dinghy carrying survivors from a shipwreck (see Figure 1a). The previous method of calculating the dinghy's trajectory can guess where the dinghy would be on the basis of imprecise information about wind directions and currents (this is the noisy model). Let's say a ham radio operator has heard from someone on the dinghy, but this information is also imprecise (this is a noisy datum). How does one combine the two to find an optimal guess, without first tracing out a lot of possible paths and then finding out that most of the traced paths are in fact made unlikely by the data? Implicit sampling makes it possible to do this quickly and efficiently. The real-life applications carried out so far include applications to oceanography, meteorology, geomagnetism, biology, and engineering. Figure 1b shows numerical results from an application to combustion, where one is trying to estimate the state of a flame from a mathematical model supplemented by noisy data. The graph shows the mean and variance of the error as a function of the number of "particles" (i.e., samples), with two estimation methods: one in wide use, and one based on implicit sampling. The latter has much smaller errors at much lower costs.he efficient sampling of many-dimensional probability densities will have a large impact throughout science.