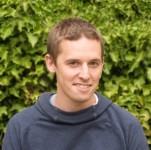 Chris Rycroft is an associate professor of applied mathematics in the Harvard John A. Paulson School of Engineering and Applied Sciences. He is interested in mathematical modeling and scientific computation for interdisciplinary applications in science and engineering. He is particularly interested in the mechanics of materials, numerical methods, and geometry. He has released several software libraries, including Voro++ for three-dimensional computations of the Voronoi tessellation, a technique in computational geometry that has a wide range of applications.

Prior to his appointment at Harvard, Rycroft was a Morrey Assistant Professor in the Department of Mathematics at the University of California, Berkeley. While in Berkeley, he was part of the Bay Area Physical Sciences–Oncology Center (PS–OC), where he investigated how cancer cells mechanically interact with each other and their environment.

Rycroft is a visiting faculty scientist at the Lawrence Berkeley Laboratory, where he has worked on several projects relating to energy production and efficiency. He obtained his Ph.D. in Mathematics in 2007 from the Massachusetts Institute of Technology.

A number of algorithms to analyze crystalline porous materials and their porosity employ the Voronoi tessellation, whereby the space in the material is divided into irregular polyhedral cells that can be analyzed to determine the pore topology and structure. However, the Voronoi tessellation is only appropriate when atoms all have equal radii, and the natural generalization to structures with unequal radii leads to cells with curved boundaries, which are computationally expensive to compute.

Crystalline porous materials have many applications, including catalysis and separations. Identifying suitable materials for a given application can be achieved by screening material databases. Such a screening requires automated high-throughput analysis tools that characterize and represent pore landscapes with descriptors, which can be compared using similarity measures in order to select, group and classify materials. Here, we discuss algorithms for the calculation of two types of pore landscape descriptors.

One of the main bottlenecks to deploying large-scale carbon dioxide capture and storage (CCS) in power plants is the energy required to separate the CO2 from flue gas. For example, near-term CCS technology applied to coal-fired power plants is projected to reduce the net output of the plant by some 30% and to increase the cost of electricity by 60–80%. Developing capture materials and processes that reduce the parasitic energy imposed by CCS is therefore an important area of research. We have developed a computational approach to rank adsorbents for their performance in CCS. Using this analysis, we have screened hundreds of thousands of zeolite and zeolitic imidazolate framework structures and identified many different structures that have the potential to reduce the parasitic energy of CCS by 30–40% compared with near-term technologies.

Voro++ is a free software library for the computation of three dimensional Voronoi cells. It is primarily designed for applications in physics and materials science, where the Voronoi tessellation can be a useful tool in the analysis of densely-packed particle systems, such as granular materials or glasses. The software comprises of several C++ classes that can be modified and incorporated into other programs. A command-line utility is also provided that can use most features of the code. Voro++ makes use of a direct cell-by-cell construction, which is particularly suited to handling special boundary conditions and walls. It employs algorithms which are tolerant for numerical precision errors, and it has been successfully employed on very large particle systems.

A detailed analysis of more than 4 million absorbent minerals has determined that new materials could help electricity producers slash as much as 30 percent of the “parasitic energy” costs associated with removing carbon dioxide from power plant emissions...

When power plants begin capturing their carbon emissions to reduce greenhouse gases – and to most in the electric power industry, it’s a question of when, not if – it will be an expensive undertaking...